BenQ demonstrated its BW1000 prototype blue-laser DVD burner at the recently concluded Computex 2005 and the company plans to start volume producing the product in the first or second quarter of 2006, depending on how quickly the market for blue-laser products develops.

Single-layer Blu-ray discs will have a storage capacity of about 25GB while DL versions will have a capacity of 50GB, so the BW1000 will target high-density applications such as HDTV (high-definition TV) recording and playback, the company stated.

BenQ also showcased two DVD burner models (DQ60 and DW1640) at the show, with the DQ60 being BenQ’s first three-format (+R, -R and -RAM) drive. The DVD drive also features drag-and-drop data recording, so burning software is not necessary, BenQ pointed out. The model will be launched at the end of this month. 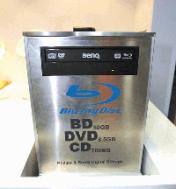