These VCs and CVCs are diving into Industry 4.0; and you? 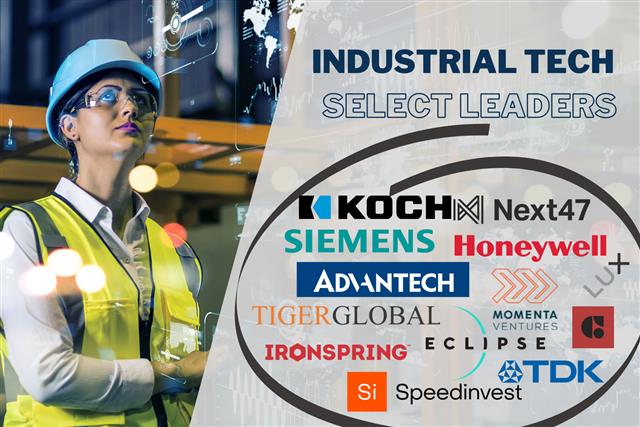 Below, we will introduce you to some of the prominent venture capital funds and corporates active in supply-chain and industrial technology. For a more in-depth conversation in Industry 4.0 investment, join Asia Venturing: The Great Convergence - Why Industrial Tech is the Next Big Thing on April 25 (SF) | April 26 (Taipei).

Created as the VC arm of Koch Industries (US$115 billion in annual revenue with 120K+ employees in 60 countries), KDT represents the U.S. industrial giant's effort to secure its future in the 4th industrial revolution. "Do it or we will end up in a dumpster," said Charles Koch, the company's CEO, in a Bloomberg interview. The conglomerate's embrace of technology sees it switching its investment targets from industrial assets, such as sawmills and refineries, to software 3D printing and AI.

Some of the promising industrial tech investments made by KDT include the unicorn Dragos, a US cybersecurity company that has raised US$364 million at a valuation of US$1.7 billion. Rockwell Automation, a leader in industrial automation, also co-invested in the company.

The VC arm of the Japanese electronics manufacturer TDK, TDK Ventures stands out as atypical corporate venture capital. Geographically agnostic, TDK Ventures partners with founders fitting TDK's strategic purposes, regardless of where they are. In addition, TDK Ventures emphasize the idea of "TDK Goodness" – a core value that drives TDK to assist startups even if they don't fit with TDK's financial requirements.

TDK Ventures prides itself on being a true venture capital in every sense. Unlike other corporate VCs, burdened by a corporate mindset that emphasizes predictability, TDK dares to probe into unfamiliar industrial sectors, in order to understand future industrial trends that potentially fit its strategic goals.

One of TDK's latest investments is Starship Technologies, a U.S. company building self-driving delivery robots. The company raised US$197 million, counting the global automaker Daimler among its early investors.

Different from traditional VCs, Advantech's CVC primarily focuses on co-creation sponsorship in which Advantech provides funding to startups (many without taking equity), encouraging them to integrate Advantech products into their hardware and software. When investing, Advantech typically targets 15-30% ownership with the check size ranging from US$300K to US$15M+.

Advantech's CVC also co-invests with domestic and foreign PE and VC funds, leveraging their expertise in certain fields. The latest example is Advantech's cooperation with the Switzerland-based Momenta Ventures in creating the AIoT Ecosystem Fund, targeting Europe and North America. The fund has invested in startups such as Edge Impulse, a development platform for embedded machine learning, and Overview.AI, a company that provides deep learning vision systems for defect detection.

Backed by the German industrial giant Siemens, the fund is vital to Siemens' industrial tech strategy and dedicates itself to fostering digital disruption and developing fourteen core technologies of Industry 4.0, including robotics, AI, VR, and cybersecurity. "Siemens itself was a startup in 1847," said Joe Kaeser, president and CEO of Siemens, in the press release. "With Next47, we're living up to our company founder's ideals and creating an important basis for fostering innovation as we continue Siemens development."

With offices in Palo Alto, Berlin, Munich, Israel, London, Beijing, Paris, and Utah, Next47 prefers to be the lead investor writing US$5-35 million checks. Among its portfolio is Bringg, an Israeli data-led delivery platform in which Next47 co-invested with Coca-Cola. Bringg has raised US$184 million so far.

As of 2021, Honeywell generated around US$34 billion in revenue and had about 110,000 employees worldwide.

For Honeywell, Industry 4.0 is about the transformation of the supply chain, and software plays a crucial part in the ongoing industrial revolution. In fact, of Honeywell's 19,000 engineers, half of them work on software. Paul Crimm, Honeywell's senior director of innovation, said to IndustryWeek, "software will be the key catalyst in the advancements of everything we do."

With that in mind, Honeywell Venture Capital was launched in 2017 with an inception fund of US$100 million. Darius Adamczyk, Honeywell president, and CEO regarded the investment fund as a long-term commitment and a pillar of Honeywell's innovation for years to come, according to its financial release.

Among Honeywell VC's portfolio is the US startup Fictiv, a series D digital manufacturing platform that delivers precision parts on-demand. Co-investors include G2VP (spun out of Kleiner Perkins with US$350 million AUM focuses on emerging technologies driving sustainable transformation across traditional industries) as well as Bill Gates. Construct Capital focuses on U.S. early-stage startups engaged in foundational sectors in the real economy, ranging from mobility to manufacturing. Construct Capital believes that these sectors account for half of American GDP but receives only a fraction of investment.

"Just as SaaS and Cloud redefined the IT space over the past 20 years, we believe the next decade will be about re-imagining the real world," said Dayna Grayson, a co-founder and general partner of Construct Capital, in a Washington Business Journal interview. "While these crippling problems are nothing new, shocks to the system like the global pandemic have certainly highlighted their urgency."

One of the startups on Construct Capital's portfolio is Veho, a U.S. end-to-end parcel delivery company in which Construct Capital co-invested with Softbank Vision Fund and Tiger Global Management. Veho has raised a total of US$299 million.

Eclipse Ventures believes that the Fourth Industrial Revolution has come to an inflection point, and thus the time has come to digitize the real economy and legacy industries. Eclipse Ventures particularly focuses on startups offering "full-stack" solutions, as manufacturing and supply-chain industries have been converging a growing variety of hardware and software technologies.

"Three or four decades of technology innovations were coming together to create what we now call full-stack", said Lior Susan, founder and Managing Partner of Eclipse Ventures, in a Techcrunch interview.

Momenta was formed to invest in and accelerate the digitization of manufacturing, supply chain, smart spaces and energy, targeting Europe and North America. Ken Forster, the Executive Director of Momenta Ventures, noted the surge of investment into Industry 4.0 as far back as 2014. One of Momenta's latest investments includes Xage Security, a company offering a blockchain-protected security platform for Industrial IoT. A prominent co-investor is GE Ventures.

Notably, in 2021 Momenta partnered with Advantech to launch an AIoT Ecosystem Fund, targeting companies at the intersection of AI and the Industrial IoT. In this partnership, Momenta has been key to helping Advantech to refine its vision and strategies, aiming to build an ecosystem of edgeware partners. "Advantech's understanding of hardware and vertical use cases is as critical as Momenta's contribution in AIoT," said Forster.

"Everything comes back to these words 'industrial tech' for us," said Ty Findley, co-founder and general partner of Ironspring Ventures in a Techcrunch article. "There is this massive gap where people forget that almost the majority of GDP in this country is manufacturing." Ironspring has a strong tie with HOLT CAT, with HOLT CAT's CEO Peter Holt (great-grandson of Benjamin Holt who built the first Caterpillar in 1904), and HOLT Ventures' founder Adam Bridgman also being founding general partners.

At its foundation, Ironspring Ventures considers itself a network-driven fund whose mission is to accelerate digital adoption across legacy heavy industries, and ultimately catalyze the adoption of digital industrial solutions that will drive sustainability across the industrial value chain. With co-investors like Lux Capital and Construct Capital, Ironspring Ventures invested in Copia Automation, which brings DevOps tools to industrial automation.

"Every 10 to15 years, there's some secular wave in technology," said Josh Wolfe, Lux Capital's co-founder in the Hubtle article. "In the 1970s, it was personal computing. In the 1980s, it was biotech. In the 1990s, it was the internet." When Lux Capital was founded in 2000, it aspired to turn to an area that would have great potential but unnoticed by others, and it zoomed onto advanced materials.

Twenty years have passed, and Lux Capital seems to have found a new target. In 2021, Lux Capital invested in Nozomi Networks, a US startup providing cybersecurity for the industrial sector. Nozomi Networks has already raised US$166 million, attracting investors ranging from GGV Capital, Honeywell Venture Capital to Porsche Ventures, the VC arm of Porsche. Another prominent company on Lux Capital's portfolio is Bright Machines, a U.S. manufacturing software company that has raised US$179 million, receiving investments from BMW i Ventures as well as Eclipse Ventures.

One of the most prolific investors in billion-dollar startups (adding 118 unicorns to its portfolio in 2021 alone), Tiger Global is partially a hedge fund and partially a private equity investor. Tiger Global's portfolio has also seen a growing array of startups dedicated to industrial robotics.

Prominent startups on Tiger Global's portfolio include Locus Robotics, a U.S. warehouse robotics startup that has raised US$299 million. With a valuation of US$1 billion, Locus Robotics has also become an Industry 4.0 unicorn. Versatile, a US company using machine learning to optimize industrial processes, is another prominent company in which Tiger Global co-invested with Robert Bosch Venture Capital. The company has raised US$108 million so far.

An early-stage investor with a pan-European focus backed by 40+ leading European industrial companies, Speedinvest has offices in Vienna, Berlin, London, Munich, and Paris. Since 2021, Speedinvest has turned its attention to industrial technology under its newly raised US$80 million Climate & Industry Opportunity Fund, in order to realize its vision of the digital and green industry.

According to an EU-Startups interview with Oliver Holle, Speedinvest founder, Speedinvest was the most active VC during the pandemic (February - May), with 16 deals. The founder also expects industrial tech to be among the emerging technologies that make a difference over the next five years.

Led by Marie-Helene Ametsreiter, General Partner at the Industrial Tech team, Speedinvest has invested in startups such as TWAICE (digital twins for battery testing and efficiency) and Schüttflix (digital marketplace for bulk construction supplies).

Asia Venturing is a series of monthly roundtables with roadmaps to the future focusing on the hype vs the reality of Asia's supply chain-boosted innovation ecosystem, jointly powered by DIGITIMES and Anchor Taiwan. We bring together leading industry luminaries, corporate strategists, experienced investors, and entrepreneurs to expand your network and redefine the possibilities of cross-border opportunities. The replay of the latest session can be seen on DIGITIMES or Anchor Taiwan)

Tags
analysis Anchor Taiwan startup
Share this article
Other links
Print
Related content
Related stories
Industry 5.0, ESG and cross-border co-creation: The rise of industrial tech turns eyes toward Asia
Venture studio, the right answer to trigger Industry 4.0?
Industry 4.0 is bringing Asia closer to Europe; Momenta Ventures is a key driver
From cassette tapes to Industry 4.0: How corporate venturing charts TDK's way forward
A 'hardware renaissance' is coming: Where does Asia stand?
Related topic
Opinions
Looking for startups?
Startup database
Profiles of startups from Taiwan and around the world: their technologies, product developments, fundraising rounds, etc. All startups are welcome to register their profiles - free of charge.
Register
Accelerators & incubators
Information about accelerators and incubators from Taiwan and around the world that are mentoring startup businesses and teams. All mentors are welcome to register their info - free of charge.
Register
Events calendar
Major events, including those organized by the government, DIGITIMES, and others, featuring startups, innovative technologies and products from Taiwan, Asia and around the world.