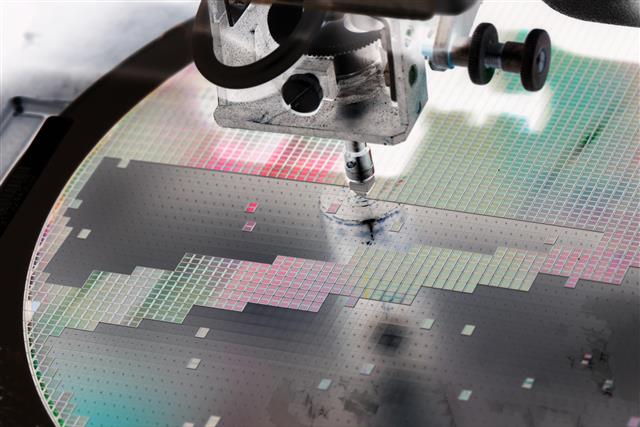 The back-end semiconductor manufacturing process refers to the IC packaging and testing that people often hear about. Specifically, the process known as chip probing (CP) is conducted to test the electrical characteristics of each die on the wafer, so that dies with faulty electrical performance can be vetted before packaging, effectively reducing unnecessary manufacturing costs from faulty products.

Once probing is complete, the second process is called sorting, which is a quality inspection process. The goal of sorting is to quickly distinguish the dies that meet the desired specifications from those that don't. For products that pass the sorting process, the manufacturer may have them further binned into levels 1, 2, 3, or even more levels to match the specifications needed in the production of various electronic components, while defective ones can then be subjected to follow-up repairs and adjustments.

Ray Lin, ADLINK Smart Machine Product Center Manager, said that increasing sorting efficiency is without a doubt the main goal for semiconductor manufactures looking to speed up packaging and testing to quickly and accurately distinguish good dies from defective ones. The reality of the situation, however, is that speed and accuracy are often opposing goals, in which meeting one means sacrificing the other. This is the biggest conundrum that many manufactures have to face.

To solve this, ADLINK developed a die sorting solution that integrates both image acquisition cards and motion control cards. This solution allows end users to easily achieve capabilities like multiaxial integration and rapid feedback response through a single coding process, striking the optimal balance between speed and accuracy.

Lin pointed out that several pain points exist in semiconductor sorting, with the first being the complexity of simultaneous multiaxial control. During normal sorting operations, a robotic arm will pick the die up, rotate to the destination zone, then unload the die down to the tray. This process not only involves x-axis and y-axis movements between the dies and the tray, but also z-axis movement owing to the lifting and unloading motion of the arm. Consequently, the sorting machine will have to control 6 to 8 motion axes to guide the movement of arm, the suction head, video input, and other sub-systems to integrate into different work areas. To have a traditional PLC-based control system perform these tasks would involve an extremely high level of coding complexity.

Second is the fact that the commonly seen traditional PLC-based infrastructures lack flexibility and usually do not support video input. If an end user wishes to achieve fast and accurate positioning on such system, then a separate video system needs to be purchased and arduously integrated into the system, greatly ramping up development costs.

Yet another issue will be caused by the demand for higher testing efficiency due to the increase in the number of units to be tested. Take this year (2021) for example, as smaller and smaller dies become more in demand, wafer manufacturing processes have also evolved, resulting in 3 to 4 times the number of dies that can be cut in comparison with that of the past. This has in turn translated into a much higher number of units to be tested. Motion control efficiency must therefore also increase to match previous production speeds, presenting a challenging task.

Feynman Lin, Technical Director of the ADLINK Smart Machine Product Center, said that ADLINK can provide components like image capture cards and motion control cards under a unified PC-based infrastructure to give them exceptional compatibility and usability. Furthermore, since the cards share a unified interface, end users are also much less likely to make errors during operation. More importantly, ADLINK's sorting solution is built ready-to-use and based on the premise of integrating machine vision and motion control into a single system, meaning that end users can easily perform further customization to create a single program that can coordinate between visual input and simultaneous multiaxial motion control. Not only does this help reduce development costs, but having the steps of visual location, suction loading, arm rotation, and unloading be performed as a continuous motion can contribute towards further raising packaging and testing efficiency.

It is also worth noting that as the industry moves towards the age of the Internet of things (IoT), factory operations are also starting to rely on more types of ports for greater connectivity. International interface standards like USB and Ethernet jacks, are being used for connectivity to various sub-systems like machine vision, temperature sensing, and pressure detection. On this front, PC-based solutions undoubtedly provide superior flexibility and compatibility compared to traditional PLC-based industrial controllers, making PC-based solutions better at meeting clients' various needs for precision equipment.

Lin stressed that ADLINK's sorting solution includes three other major functions that make it the optimal choice for solving pain points in the sorting process. First, the solution can quickly adjust itself based on real-time feedback of the detected die surface (e.g., unevenness of the surface) to reduce sorting time by 20% to 30%.

Second, the solution has an "instant trigger" function that combines machine vision and multiaxial precision positioning compensation technology to swiftly sort out faulty products from non-faulty ones with a precision of up to 30nm, and separate the dies according to their levels and place them into corresponding trays. Lastly, ADLINK's sorting solution supports automated sorting processes that can be quickly adapted to different pre- and post-processing needs. For example, this solution can be made to transfer an object in the "NG die" tray to the repair station or send an object from the "Level 1 qualified die" tray to the corresponding testing machine to verify that the die truly meets Level 1 specifications. This is the main reason why ADLINK's sorting solution has been well received by end users.

For the past 25 years, ADLINK has been pushing the boundaries on new solutions for the semiconductor industry as many clients have become reliant on ADLINK technologies. The Company has become the best equipment partner for major semiconductor players in the Greater China region. ADLINK's comprehensive sorting solution combines machine vision and motion control for faster, more accurate, and more productive solutions in preparation for future market demands. 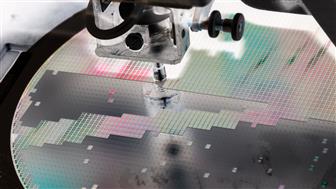 Ray Lin, ADLINK Smart Machinery Product Department Manager, said that increasing sorting efficiency is without a doubt the main goal for semiconductor manufactures looking to speed up packaging and testing to quickly and accurately distinguish good dies from defective ones. 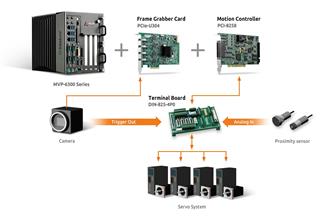 ADLINK can provide components like image capture cards and motion control cards under a unified PC-based infrastructure to give semiconductor exceptional compatibility and usability.