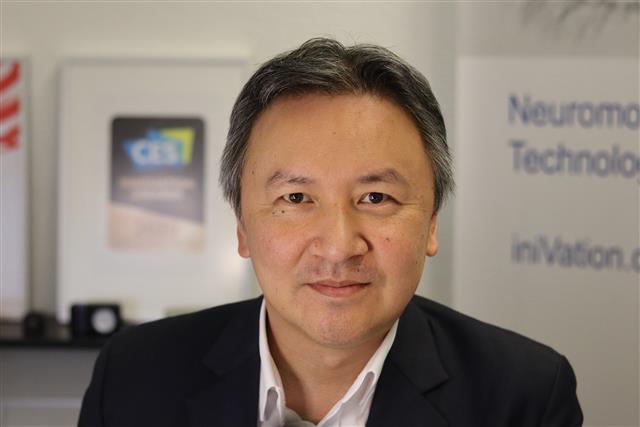 IniVation, a Switzerland-based vision sensor and software company, introduced its latest high-performance neuromorphic vision sensor technology, Aeveon, at CES 2023. While the biology-inspired vision technology has many applications in highly specialized niche fields, particularly industrial vision, the company is pushing the ultra-high speed camera into the consumer and automotive segment.

IniVation CEO and co-founder Kynan Eng said the new Aeveon sensor technology is scheduled to produce the first batch of demonstrators later in 2023 that will be suitable for robotics applications. For consumer products, he added that mass production of the sensors may be around 2025.

Another improvement is in the way the events encode lighting changes, which are output as binary up/down signals in the older DVS and can also contain multi-bit information in the new Aeveon sensor.

Currently-in-production DVS sensors can produce a lot of noise - or low signal quality - in low lighting conditions, which is not ideal for consumer electronics applications, according to Eng. "If the application is required to work in very low lighting conditions, the full dynamic range benefits of DVS may not be always directly achievable or require extra processing to achieve the benefit."

To address these shortcomings of existing technology, the company designed a new generation of sensors and architecture to improve the quality of the events and frames, as well as including on-sensor compression. With a stacked design in the new sensor, a lot of processing takes place in the sensor itself.

Applications from defense, aerospace, AR/VR, to smartphone and automotive

Eng noted that IniVation has been working with automotive OEMs, which need as high resolution as they can for autonomous driving up to 4K resolution.

Current applications of DVS sensors include train positioning, fast tracking of vehicles and other assets, and industrial automation; they have also been tested in space for observing lightning – which is a very fast event that can only be captured by high-speed cameras.

IniVation believes this technology can "go into every single image sensor in every application, and anything from phones, cars, robots, to toys can use this technology."

For autonomous vehicles and robotics, the company is working with different AI technologies that are compatible with the sensors. Eng said IniVation's mission is to make sure that the AI system receives data from the new sensor as fast as possible, because reacting even one millisecond faster can make a difference in avoiding a collision. In this way, IniVation's ultra-high speed cameras are expected to make autonomous driving safer.

Eng said the sensors are expected to integrate with high-end smartphones and luxury cars, and the manufacturing costs of Aeveon will be similar to the costs of existing state-of-the-art phone sensors, as the sensors are manufactured using standard silicon fabrication processes.

Some chips they currently use are supplied by Samsung Electronics, which has been a technology partner for several years. Eng said Samsung approached the technology team while they were still doing research at the University of Zurich and ETH Zurich.

The research team included experts with a wide range of backgrounds from biology, computer science, neuroscience, electrical and mechanical engineering.

Since spinning off as an independent company, for different versions of the sensors, IniVation uses chips made by different foundries including Samsung, TSMC, and Tower.

Working with Samsung, IniVation was able to bring products to 35 countries including China and the US – which are now IniVation's largest customer bases.

Samsung has launched one consumer IoT device using its DVS sensors. Currently, IniVation is in contact with several other consumer electronics companies as well as carmakers in Europe and Asia.

The Swiss company also supplies sensors for research into defense applications in the US.