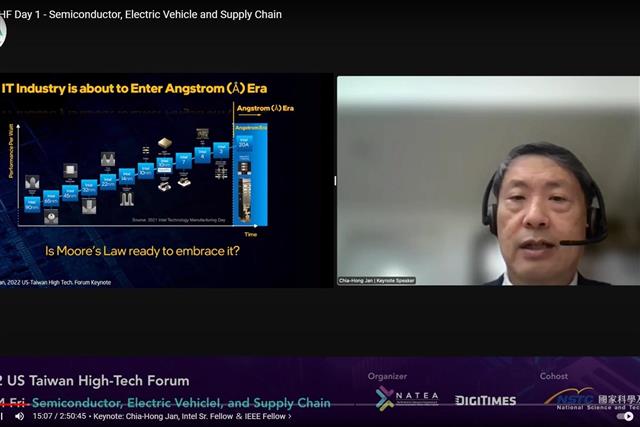 Experts spoke on the first day of the 2022 US-Taiwan High-tech Forum (UTHF) and gave reasons for optimism for the semiconductor industry outlook in the next 10 years. However, they also cautioned that the biggest threats and roadblocks for the next decade are not in semiconductor technology itself but in non-technical factors.

Intel senior fellow Chia-Hong Jan, in the keynote speech, said he has never been so optimistic over his 32 years of experience as now because technical issues such as device architecture, advanced materials, EUV and lithography, and 3D packaging are giving engineers lots of flexibility and freedom to overcome technical issues and keep Moore's law going under 1nm levels.

"However, I want to point out the non-technical factors could have more influence in the next 10 years," Jan emphasized that although AI, datacenter, gaming, electronic vehicles and 5G, 6G are propelling the demand for chips, issues such as lacking new ideas, attractive new end products, or lacking funding to support the challenging development of advanced technology in the future, could make the progress of Moore's Law grind to a halt.

The other factor is geopolitical risk. "Everybody knows if a war starts, it could disrupt and prevent the continuous improvement of Moore's Law," said Jan.

Jan stressed that creative engineers would continue to innovate in devices, lithography, materials, and packaging, to keep Moore's Law alive in the next 10 years.

"People are saying, with EUV as a one-time solution, we are able to get it last for 14 years to enable Angstrom era," Jan said, "I think it is possible, but the only problem is (the sustainability of) electricity supplies." According to Bloomberg, the power consumed by TSMC's EUVs is going to account for 12.5% of Taiwan's total power consumption by 2025.

Half of Taiwan's supply chain capacity may move out of China

Colley Hwang, president of DIGITIMES, explained that the ICT ecosystem is undergoing a transition due to the US-China Trade War. "Taiwan probably will keep 50% of its manufacturing capacities in China, and the rest will go to Southeast Asia or India," said Hwang. "Electrical vehicles, especially, will be manufactured in India and Southeast Asia, because they need to be integrated with the local ecosystems." He emphasized that Taiwan's manufacturing solutions not only will be needed by India and ASEAN countries, but also Mexico, Canada, and even America, as supply chains are becoming regionalized.

For the end product market that would affect the demand for chips, Hwang pointed out that besides Apple, Amazon, Microsoft, Google, and Tesla are all developing their own chips, so are Alibab, Xiaomi, and Tencent, and which have become a new worldwide market trend for the semiconductor industry.

As for the geopolitical risks that the semiconductor industry is likely to experience in the next 10 years, Hwang said isolating China is a likely scenario, but if that results in a long-term recession in China, it will increase the probability of war or the Chinese invasion of Taiwan.

Hwang predicts that TSMC's revenues in 2022 will surpass that of Intel and Samsung and become the largest semiconductor company in the world. "Very rarely does a company have all of the three pillars of competitive edge, namely -- process technology, client structure, and ecosystem, but TSMC got them all," said Hwang.

At the end of his speech, Hwang said since India is expected to take over Japan and become the world's third-largest economy by 2030, and with electronic supply chains moving to India, they would want to have their domestic semiconductor and LCD panel industries. "We will see how we (Taiwan and India) can cooperate together," said Hwang. In his closing remarks, Hwang said that people need to unlearn what they have learned so that they can come up with better strategies in a world that has transitioned into a "one-world, two systems" structure after the US-China power competition.

Eric Breckenfeld, director of technology policy at Semiconductor Industry Association (SIA), in his presentation, explained the CHIPS and Science Act's support for the industry and said funding is closing up the "valley of death" that semiconductor innovations going from labs to fabs experienced by startups.

UTHF 2022 is co-organized by the North America Taiwanese Engineering and Science Association (NATEA) and DIGITIMES, while is co-hosted by the National Science and Technology Council (NSTC). The second day of the forum will be held on November 11, 04:30-07:30 pm PST.