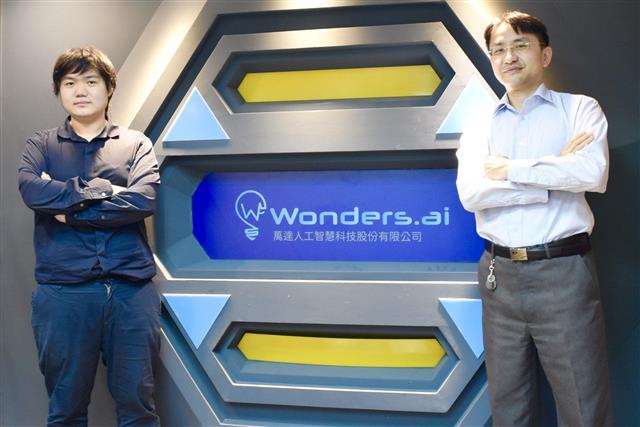 Startup team Wonders.ai is making an attempt to bring animated characters on the other side of the screen to life using AI technology. By giving them personality and social capabilities, they can become AI companions in people's daily lives.

According to Wonders.ai founder and CEO Michael Lin, some concepts of their product came from the 2013 US movie "Her," which tells the story of a man falling in love with his AI assistant. Lin pointed out that in the movie, the AI assistant acts like a secretary or companion for the main character. In addition, AI's intelligence continues to evolve and is not just a rigid chatbot.

Lin hopes that Wonders.ai's virtual character can have the same rich and natural movement as a real person. However, in terms of appearance, he still favors the anime-style look. It's not just because Lin is a fan of anime himself but also because he believes that if a virtual character looks too realistic, it could cause the "uncanny valley" effect, which doesn't bode well for a companion character.

Wonders.ai was founded in Silicon Valley in February 2018. In 2019, it expanded its offices to Taiwan. The main source of funds is angel investors in the US. As of now, it has raised NT$200 million (US$6.25 million), with a focus on research and development for the early stages. It currently has around 20 employees.

Lin got his start in AI during his university days when he wrote a match analysis AI program for an esports competition. He later shifted his focus to VR after participating in several events. Ansforce CEO and influencer Jefferey Chiu acts as Wonders.ai's consultant. In exchange, Lin helps promote Ansforce overseas.

Facebook changing its name to Meta has generated a lot of hype about metaverse. But Lin believes that to build a virtual world, you first need to have a complete "world," and be an industry leader in terms of content creativity and technology. Or else, you're merely following a trend.

"The metaverse is not a new concept. The MMORPG games we played 15 to 20 years ago are already a type of metaverse," said Lin. Wonders.ai's vision is to bring virtual characters into the real world to become the user's friend, family, lover, or companion animal. Not only would they have personality and emotions, but they could also chat and interact with the user. However, Lin emphasized that virtual characters can only act as support and cannot completely replace actual interpersonal interactions.

At events, Wonders.ai demonstrated an interactive technology where the augmented reality (AR) image projected from a phone can be obscured by real people or objects, rather than the objects passing through and distorting the image like regular projections. This kind of technology relies on AI algorithms and spatial recognition applications. Wonders.ai developed the AI-powered mixed-reality (MR) application platform Wonder Platform, which gives virtual characters the ability to detect, track, and identify objects, hand gestures, and the environment.

Through natural language processing and voice synthesis technology, virtual characters can respond to users by synthesizing an emotionally charged voice in real-time as well. This technology has already received two international patents for AI utilization, with another three patent applications in process.

The team has also developed the "personality engine" based on the five-factor model of personality. The virtual character's attitude toward the user will change as time goes on and to suit different contexts, giving users a personalized and unique experience. This sort of technological development will be within the range humans can control. Virtual character Pipkin Pippa interacts with real-life fans on the stage at the livestream of Series AI held in Canada in September 2022.
Photo: Wonders.ai

When discussing its market position, Lin stated that Wonders.ai is an AI tech company, not a game or animation company. Currently, VR developers around the world each have a different vision. Wonders.ai believes that it can create more instant interaction and customized content. On top of that, Wonders.ai's technology can be used on smartphones and doesn't require buying an extra virtual character projection device.

Starting in the fourth quarter of 2022, Wonders.ai will be showcasing the Wonder Platform at Vtuber events in the North American regions and collaborating with more virtual character developers. Right now, besides a small office in Silicon Valley, Wonders.ai also plans to gradually expand its business to Japan and utilize its AI technology in the medical and education sectors.