PXPay Plus Can Fully Focus on its Core Business.
Sponsored
Home Asia

Supply Chain Summit: Experts see India's and ASEAN's opportunities in charting a middle path between US and China 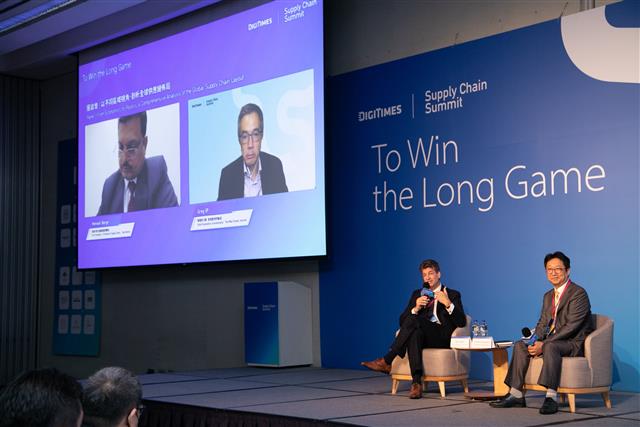 A part of the Supply Chain Summit hosted by DIGITIMES Asia on September 27 in Taipei, the panel "From Economics to Politics, a Comprehensive Analysis of the Global Supply Chain Layout" included Alex Capri, research fellow of Hinrich Foundation, Greg IP, Wall Street Journal's chief economics commentator, and Hermant Barge, vice president of VP of Purchase & Supply Chain at Tata Motors. They exchanged views on how India, ASEAN and emerging economies were positioned in a post-pandemic world bifurcated by US-China rivalry.

As Western policymakers and boardrooms contemplate over a China-free supply chain amid supply-chain restructuring and formations of Quadrilateral Security Dialogue (Quad) that includes the US, Japan, Australia and India, Capri believed that it would present India a historical opportunity to host the relocated supply chains and become a global technology hub. Nevertheless, despite recognizing the current Indian government's efforts to streamline the country's burdensome tax systems and synchronize the industrial policies between state-level and central governments, Capri still drew attentions to some challenges faced by India, including the uneven digital developments leading to a digital divide, in addition to the lack of infrastructure compared to China. Despite these drawbacks, "islands" of technology hubs are emerging on India's horizon, and show great promises of becoming technology clusters as Apple moves into the sub-continent, bringing along an entire electronics manufacturing ecosystem that includes first-tier and second-tier suppliers.

In response, Tata Motors' Barge pointed out that India already had a great software and engineering foundation, while the government is actively developing logistical strategies for the coming five years, including investment in key infrastructure like airports and seaports.

Ip, meanwhile, observes that India is once again a leading player in a new Non-Aligned Movement, referring to the Cold War-era grouping of states that sought to walk a middle path between the Soviet and Western blocs. However, Ip indicated that the nature of India had already changed since the Cold War, when non-aligned countries, including those in Latin America, were mainly inward-looking, protectionist countries engaged in import substitution and with limited connections to the exterior world. Today, India is plugged into the global economy, and seeks to be plugged even deeper into the system. Many Indian companies, likewise, have global aspirations. While the original Cold War was primarily a political and economic conflict, Ip observed that the victory defined in today's "Hybrid Cold War" is no longer about the capture of territories, but the capture of markets and allies. In this context, Ip pointed out that it would be very important for the US not to harbor expectations for India and other non-aligned countries to become "treaty allies" or integrated trade partners.

Instead, Ip observed that the US would seek to ensure that these countries follow Western standards. Using cloud industry as an example, Ip observed how leading cloud players like Microsoft, AWS and Google had been rooted in liberal ethos that emphasized privacy and security. In comparison, Chinese cloud players don't have such reputations. Ip also used the flexible nature of the Indo-Pacific Economic Framework, initiated under US president Joe Biden, to emphasize why a less-binding framework on which countries could pursue common standards was a more alluring strategy.

When it comes to ASEAN, Capri also observed the same sentiment of not wanting to make a binary choice between the West and China. Using Vietnam as an example, he noted how the country successfully attracted both Chinese and Western investments, while working with multinational companies via successful private-public partnerships. At the same time, Capri also saw opportunities for ASEAN countries to step in as de-coupling with Chinese supply chain in some strategic sectors took place. "That's the long game," he said.

As the US raises interest rates, countries like those in ASEAN might still be negatively impacted by the strong dollars, Ip warned. Even though the economist has yet to see some worrying precursors like those leading to the 1997 Asian financial crisis, such as Thailand's and Indonesia's fixed exchange rates and large current account deficits back then, while central banks nowadays are more or less independent and target inflation instead of exchanged rates, as the FED tightens, "it would eventually lead to some kinds of crisis," Ip said, as the measures inevitably weaken economic growth. Ip pointed to the quantitative tightening taking place in the UK as an example. Using the opportunity, Ip drew attention to the fact that emerging economies aren't always the source of troubles: advanced economies like the US, the UK and Italy have structural deficits, and haven't got used to the idea that the days are over when governments can resort to borrowing to finance stimulus plans. Five years ago it was still welcomed as interest rates were low, Ip noted, but with the high interest rates nowadays, such measures are no longer welcomed.