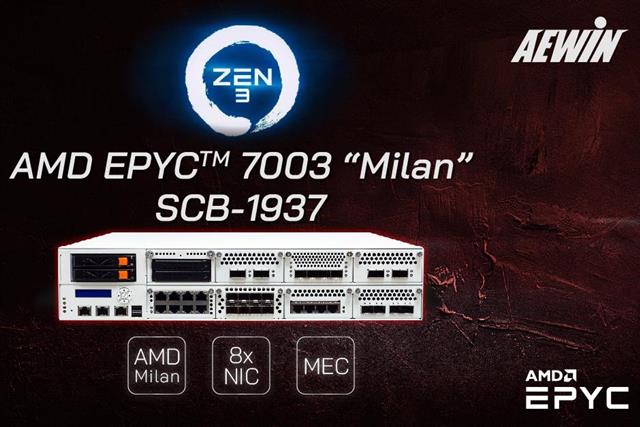 In the era of smart devices, the capabilities of traditional networking equipment are no longer sufficient as more diverse IT system functions become available. Therefore, virtualization has become a focal point when designing corporate IT systems. Apart from large-scale independent software vendors (ISV) and cloud service providers relying on virtualization, small-scale operators have also begun investing in this technology, generating demand for the market as a whole. AEWIN has navigated the networking field for many years, accumulating abundant technological expertise and experience. Recently, AEWIN has built the SCB-1937, a high-performance networking computing platform that supports the latest EPYC 7003 Milan CPU launched by the large processor manufacturer AMD. This platform can help enterprises swiftly introduce network function virtualization.

The SCB-1937 computing platform launched by AEWIN can also meet the recent demand for Edge AI. The network's I/O ports and expansion interfaces are at the front of the platform, shortening the time for module installation and maintenance, facilitating the connection of network switches. The depth of the platform is 60 cm, allowing enterprises to install high-performance network equipment within limited spaces. The SCB-1937 platform uses two AMD EPYC 7003 Milan CPUs. This family of processors support the latest bus standard, PCIe Gen4, and up to 128 lanes of PCIe Gen4, which comprehensively increase transmission speed. Moreover, it has eight PCIe Gen4 x8 expansion slots that support networking modules, U.2 NVMe SSD modules or GPU/FPGA accelerators. Regarding networking configuration, the SCB-1937 can support up to eight network expansion modules, with flexible Ethernet port configurations, including 64x 1GbE, 64x 10GbE, 32x 25GbE, or 8x 100GbE ports.

AEWIN also makes the most of the memory support of the EPYC 7003 Milan CPU. The platform supports a memory capacity of up to 4TB and eight channels DDR4 RDIMM (up to 3200Mhz), which significantly enhance the computing capabilities of virtualization. In terms of the I/O interface, the SCB-1937 has two management ports for BMC/IPMI management functions, a console port, two USB 3.0 ports, and a 5-key LCM module. In addition, the SCB-1937 supports two hot-swap 2.5" SATA HDD/SSD docks, one mSATA and two M.2 2280 slots.

With regard to SCB-1937 applications, AEWIN pointed out that the platform allows ISV clients to create higher values with less equipment because of the SCB-1937's 128 computing cores, high-capacity RAM, high-speed bus PCIe Gen4, and more diverse network interface. In the past, enterprises had to purchase different kinds of IT equipment based on different types of services when responding to their expanding business scope. This approach not only leads to huge costs of IT deployment but also makes it difficult to fully leverage the performance delivered by hardware equipment. By incorporating all functions into a virtualized infrastructure, enterprises can simplify their deployment procedures and swiftly scale out relevant applications. Various virtual network functions can be deployed in a single host or many clusters and achieve the best performance simply by using a website interface to control the functions and deploy software. As a result, virtual frameworks have gradually become the IT mainstream among enterprises and government organizations. The SCB-1937 is the best platform specifically designed for a virtual framework.

So far, this product has already achieved many successful applications. Take Edge AI application as an example, the platform is used to identify traffic flows and license plates of traffic offenders and can further connect traffic signals to alleviate traffic congestion by adjusting traffic lights. For the manufacturing sector, the platform can be used for facial recognition to manage access to certain areas. Compared with past embedded hardware, this application is an ideal choice in terms of installation costs or system flexibility.

With an increasingly fierce market competition, IT network equipment is playing a more important role in corporate operations. As AMD's long-term partner, AEWIN cooperated with AMD to conduct testing since the development phase of the CPU. This is why AEWIN can offer the best solutions simultaneously while the product is being launched. The SCB-1937 is a multi-functional computing platform that leverages the high-performance and high-frequency features of the AMD EPYC 7003 Milan CPUs. 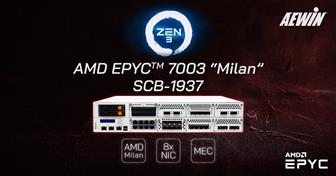