Deep01, a Taiwan-based medical artificial intelligence (AI) startup, is applying for its second US FDA (Food and Drug Administration) clearance for midline shift detection and measurement, according to the company's CEO, David Chou.

The company said it obtained its first FDA clearance for intracranial hemorrhage detection AI system, which can produce results within 30 seconds, in July this year.

"Midline shift" is an important indicator that helps emergency physician to detect the degree of midline shift for diagnosing acute cerebrovascular disease and allows neurosurgeons to decide whether to perform craniotomy according to the degree of shift after reviewing CT images, he said. The AI system helps to calculate the degree of midline shift, which can shorten the decision time of the clinician, and the patient can obtain the corresponding treatment faster, and then has a better prognosis.

The Deep01 CEO noted that medical innovation in various countries is robust. In the process of collaborating with medical companies across Europe, America, and Asia, he claimed that Taiwan AI healthcare has its industrial advantages.

Deep01, established at the end of 2016, is the first medical AI startup in Taiwan and Asia-Pacific to obtain FDA clearance in the United States. There are about 12 employees, and some medical doctors have joined part-time.

The company said its next step is to market products overseas, cooperate with foreign CT companies, and also establish partnerships with domestic and foreign PACS companies. 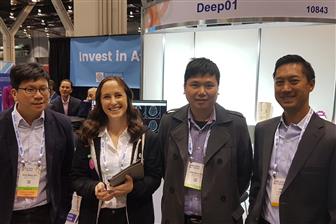 Categories
IT + CE Software, big data
Tags
AI FDA innovation medical startup startup news US
Looking for startups?
Startup database
Profiles of startups from Taiwan and around the world: their technologies, product developments, fundraising rounds, etc. All startups are welcome to register their profiles - free of charge.
Register
Accelerators & incubators
Information about accelerators and incubators from Taiwan and around the world that are mentoring startup businesses and teams. All mentors are welcome to register their info - free of charge.
Register
Events calendar
Major events, including those organized by the government, DIGITIMES, and others, featuring startups, innovative technologies and products from Taiwan, Asia and around the world.
Realtime news
Latest Digitimes news
Around the web
Interviews
Topics
Quarterly research reports