With the rapid rise of automotive electronics, industrial 4.0, and smart home applications, new IoT edge devices and human-machine interface devices will require new functionality in terms of size, power consumption, and performance. In view of this, many MCU suppliers are developing new-generation MCUs with higher performance and lower power consumption to meet the market demand. In addition, from the overall system design perspective, the RAM that works with the MCU also requires new options to provide better advantages than those of the existing SDRAM and pSRAM.

HyperRAM, which supports the HyperBus interface, is a new technical solution to address this demand. HyperBus technology was first unveiled by Cypress in 2014, and the company launched its first HyperRAM product in 2015. As the technology has been developed for many years and has a clear market position, Winbond Electronics has decided to join the HyperRAM camp and launches 32Mb/64Mb/128Mb density products. This move will help Winbond further expand its product portfolio to respond to the diverse application needs, as well as make the ecosystem more complete through active participation.

For IoT applications, various design considerations such as low cost, low power consumption, and computing efficiency must be met in order to gain widespread adoption in the market. Especially, for battery-powered devices such as smart speakers and smart meters, battery life has become the key to the success of the product, in addition to the rich IoT function and easy-to-use human interface. This makes low power consumption increasingly important. To achieve long battery life, in addition to using power consumption MCU, the other low-power peripheral components should also be considered, and HyperRAM is designed for this.

Take Winbond's 64Mb HyperRAM as an example, the power consumption of Standby is 90uW@1.8V, while that of the same capacity SDRAM is about 2000uW@3.3V. More importantly, power consumption of HyperRAM has only 45uW@1.8V in Hybrid Sleep Mode, which is a significant different from the Standby mode of SDRAM. On the other hand, if Low Power SDRAM is adopted, the form factor is still bigger than HyperRAM. That makes it not an ideal solution as Low Power SDRAM requires larger PCB area.

In addition, HyperRAM has only 13 signal pins, which can greatly simplify the PCB layout design. It also means that when designing end products, allowing MCU to have more pin out for other purposes or using MCU with fewer pins for better cost-effectiveness is made possible.

Simplifying control interface is another feature of HyperRAM. Based on pSRAM architecture, HyperRAM is a self-refresh RAM. Moreover, it can automatically return to standby mode. Therefore, system memory is easier to use, and the development of firmware and drivers is also simplified.

Sierra Lai, Director of DRAM Marketing Division at Winbond, added that the process nodes of MCU are moving from 55nm, 40nm to 28nm, or even 16nm. Although its size can meet the IoT miniaturization trend, it still needs to use new generation external memory as a data buffer to address the higher computing capabilities required by IoT applications.

However, the development of traditional SDRAM and pSRAM have matured and cannot be optimized for emerging IoT applications. Also, the DRAM process migration is based on the new generation JEDEC DDRx/LPDDRx products. Winbond's HyperRAM, which adopts 38nm process node, will continue to move toward 25nm. Considering the long-term supply requirements for automotive and industrial applications, the advanced process nodes of Winbond's HyperRAM can meet customers' longevity product lifecycle.

Therefore, from the perspective of overall system design and product life, HyperRAM has become an ideal choice for emerging IoT devices. "We saw the market demand, so we decided to develop HyperRAM products to provide customers with another choice," Sierra Lai stressed. "The maturity of its ecosystems is of course an important factor for us to move into."

At present, in addition to Cypress, leading MCU companies such as NXP, Renesas, ST, and TI have already provided MCUs that support HyperBus interface, and their new products will continue to support in the future. Meanwhile, its development platform of control interface is ready. Cadence, Synopsys and Mobiveil have also begun to provide HyperBus memory control IP, which can accelerate IC vendors' design cycle. As a result, compared to other Octal RAMs, HyperRAM has the most mature application environment. HyperRAM will also be incorporated into JEDEC standard in the future, becoming a JEDEC compatible technology.

After Winbond joined the HyperRAM camp, it will become the third supplier in the market in addition to Cypress and ISSI, which can provide customers with more choices.

Sierra Lai believed that the low pin count and low power characteristics of HyperRAM will bring significant advantages to IoT devices. As the market gradually heats up, more customers will begin to adopt this new generation memory.

The current status of Winbond's HyperRAM product line is: 32Mb has entered mass production; 64Mb and 128Mb are expected to enter mass production in 4Q19 and 1Q20 respectively. Products of 24BGA (automotive grade), 49BGA and KGD are available. Among them, size of 24BGA is 6x8 mm2, while that of 49BGA is only 4x4 mm2, which targets the consumer wearable market. 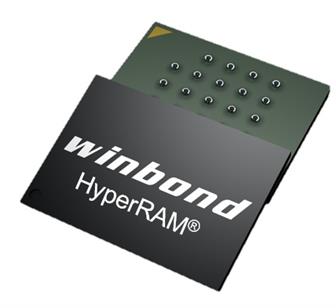 HyperRAM, which supports the HyperBus interface, is a new technical solution to address this demand