Originally developed by and for the military, drones have grown far beyond the battlefield and are now used everywhere from oil fields to private farms. They are being used for delivering packages, surveying land and assisting in disaster relief. Their scope is becoming ever more varied and their parameters are broadening.

Key to the growing range of applications for drones is the increasingly sophisticated electronics systems being incorporated. The miniaturised sensors used in today's drones allows them to be ever smaller, more lightweight and more affordable, while improved machine vision (enabled by a new generation of powerful onboard flight control systems) is providing them with better autonomous navigation, obstacle avoidance, and real-time analytics.

Drone development has traditionally been difficult, expensive and time-consuming, but today, the availability of drone development platforms has changed all that. New platforms from Intel, Infineon and Parallax are making it easier than ever to hit the ground running when implementing drone applications.

Ever since humans first took to the air, the idea of an unmanned aerial vehicle has been extremely compelling. Aircraft let us travel quickly, get a birds-eye view of things and move freely unabated by ground-borne obstruction. However, one of the biggest obstacles that they face is us. When it comes to flight, lighter is better, but since they need to accommodate a human being comfortably, airplanes have to be built larger and heavier, than they would otherwise have to be. This means more complexity, higher cost and less range, as carrying more weight requires burning more fuel.

Drones solve all these issues. Being unmanned these airborne vehicles can be made lighter, smaller and much cheaper, as life support systems are not needed. Instead, these vehicles are focused on being as light, manoeuvrable and long-range as possible. Without the risk of a human casualty, drones can also take on more dangerous tasks than manned vehicles. It's no wonder then that the development of drones has been deeply rooted in the military.

Unmanned aerial vehicles initially appeared in the 1930s. Early drone developments included balloons designed to time-release bombs over enemy lines, and unpiloted planes with explosives on board, intended to crash after a certain number of engine revolutions. The advent of radio technology brought better navigation. One of the first radio-controlled (RC) drones was used during World War II to train anti-aircraft gunners how to shoot down realistically-moving aerial targets. From then on, the pace of drone progression quickened and they were used increasingly in actual combat scenarios. Drones have been used since the 1970s in major conflicts across the world.

While drones have been used in a military context for a considerable time, it is only in this decade that they have become affordable enough to enter the consumer market. Personal drones have been made possible by innovations in micro electro-mechanical systems (MEMS) technology, driven by the requirements of the smartphone market.

Aerial navigation requires sophisticated sensors to monitor physical orientation, as well as acceleration along three different axes. In the past, this involved using relatively large and expensive inertial measurement units (IMUs) which consist of accelerometers, gyroscopes and magnetometers. These macro-sized sensing units were large, heavy and extremely expensive, limiting them to professional aerospace, naval and defence applications.

Using the same techniques that are applied to semiconductor manufacturing, MEMS technology shrunk accelerometers, gyroscopes and magnetometers, allowing them to be much smaller, cheaper and even more reliable. Today a 9-axis sensor like the Bosch BNO055 that measures compass orientation, physical orientation and acceleration in three axes can be the size of a tiny chip, smaller than a finger nail. The tremendous size and weight reduction of MEMS-based IMUs has allowed them to drive today's drones, and their low price has meant that drones can be affordable to the average consumer or small business.

With drones starting to get into the hands of everyday consumers and businesses, we have now come up with ever greater and more creative uses for them. Today, drones are used in everything from logistics to rescue operations.

For the logistics industries, drones have been used for delivering packages quickly and efficiently. Their ability to fly lets them beat traffic and navigate over ground-based obstacles. Not only can drones do deliveries faster and more efficiently than humans, but they can also deliver to areas or locations that humans currently cannot. Do you live on the 15th floor of an apartment building? A drone can deliver a package directly to your balcony. If you decide to have an impromptu picnic at the park, a drone could deliver pizza directly to your smartphone's GPS location.

The ability of drones to do quick and accurate 3D mapping of large areas has transformed surveying, and offers the potential to change other industries like tourism as well. A remotely controlled drone with high precision GPS can take detailed photos of large areas in hours or even minutes. These high resolution photographs can then be pieced together with photogrammetric software to build incredibly precise 3D maps of terrain. Areas which once took a team of ground-based surveyors weeks to survey can now be dealt with in days, thanks to drones.

Drones are also transforming disaster recovery, and search and rescue operations. In the aftermath of a natural disaster, key infrastructure such as roads and electricity can be seriously damaged, making it difficult for ground-based relief to arrive quickly and work efficiently. In these situations, drones can perform aerial surveillance of an area to discover the location and status of disaster or search for injured people. Drones can even be used as first responders, to deliver critical items such as food or medicine to victims in remote areas.

As miniaturised, wirelessly controlled aerial vehicles, drones are a technological tour-de-force. They contain some of the latest navigational, computational and aeronautical technologies we have today. A drone consists of a chassis, rotors, motors, electronic speed controllers, a battery and a flight controller. While the mechanical aspects such as its rotors, chassis style, and motors determine its flight characteristics and carrying capacity, it is the constituent electronic systems that are on board which distinguish modern drones from yesterday's RC planes and helicopters.

Each rotor and corresponding motor has an electronic speed controller (ESC) which controls the speed of the motor. The ESC is a mixed signal circuit which delivers high resolution 3 phase AC power to drive a brushless motor based on a control signal. Connected to a motor and the battery, ESCs are sized according to the amount of current they can drive.

Besides the ESC, the flight controller is the other essential electronic system on board a drone. Whereas RC airplanes and helicopters give operators direct control over motor speed, modern drones have multiple rotors, and the complexity of rotor speed coordination means an automated system is required. The flight controller uses an array of sensors, such as GPS, gyroscope, accelerometer, compass and barometers, to stabilise and navigate the drone by adjusting the speed of the rotors.

Getting started with drones

While there is a certain joy in building your own drone from scratch, it takes a great deal of time, effort and perseverance. Thankfully, these days there are pre-built unmanned aerial vehicle (UAV) platforms available, which allow you to choose exactly how deep you want to dive in. Perhaps the most complete, yet flexible UAV platform so far is Intel's Aero series. This platform can come either as a flight controller compute board, or a ready-to-fly drone development platform.

In the ready-to-fly option, Intel's Aero drone is a fully assembled quad-copter running Linux on a multi-core Atom SoC processor. It has flight controller software pre-installed - allowing users to fly the drone out of the box without any programming being needed. The ready-to-fly Aero platform allows users to focus on developing sophisticated drone applications immediately, rather than wasting time struggling with the mechanics of flight control.

The Aero drone also has multiple cameras, including a front-facing Intel RealSense R200 camera. The R200 is a depth-sensing machine vision camera system including dual conventional cameras as well as an infrared camera and infrared laser projector. The stereo vision and infrared components allow for 3D imaging and depth sensing capabilities. These can be used for collision avoidance, surveying, 3D mapping, surveillance applications and more. Besides selling as a complete, ready-to-fly drone, the Aero platform is also available as a compute board with optional enclosure and RealSense Camera, allowing the compute and machine vision capabilities to be integrated onto other multi-copter drone chassis.

Whereas they were once simply hobbyist's toys, drones today have penetrated numerous markets and are aiming for many more. At the same time, developing drone applications has never been easier. For those trying to go straight into advanced drone application development, Intel's Aero platform offers a ready-to-fly solution, and for those wanting to get down and dirty, integrated components from suppliers like Infineon and Cypress can significantly cut development time and cost. 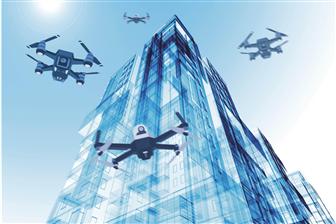