The leading global motherboard manufacturer, ASRock, is pleased to announce exciting new products for Computex 2017. ASRock will be demonstrating new DIY motherboards including its highly anticipated Intel X299 platform and Mini-ITX AM4 boards, as well as Micro-STX Mini PCs and the X10 IoT Router. ASRock welcomes visitors to experience all this and more at booth L0810 of the Taipei Nangang Exhibition Center in Taipei, Taiwan from May 30 to June 3, 2017.

ASRock will be showing its fantastic new motherboard collection based on the powerful Intel X299. The Fatal1ty X299 Professional Gaming i9 is the first motherboard in the world to feature 10Gb/s LAN, for extreme internet bandwidth and responsive gaming. The convenience of USB 3.1 Type-C onboard header that offers new USB power delivery protocol to supply up to 12V/3A of power output, allowing you to charge portable devices faster than ever!

Join ASRock at Computex for the Fatal1ty X299 Professional Gaming i9 stunning show, and witness the breathtaking gaming and graphics performance of these new X299 boards, plus a 10Gb/s networking live demo.

Intel's X299 chipset used to be represented by a bulky EATX or ATX motherboard, because the CPU, chipset, memory and whole layout required an extra-large PCB to contain the extreme performance. ASRock's R&D team has worked very hard to defy logics and build a motherboard with a small size but huge performance, and now we have succeeded in breaking the limitations to fit the whole X299 package onto a mini-ITX form factor PCB, hence the world's first and only mini-ITX X299 motherboard is born!

ASRock will be showing the slim but powerful DeskMini RX/GTX PC Series, based around new Micro-STX form factor motherboards. In addition, the compact new Z270M-STX MXM motherboard will also be on display. Despite their compact size these Micro-STX products offer outstanding performance, and they support powerful CPUs, and a wide range of expansion and connectivity options. Key features include MXM graphics card support and Triple Ultra M.2 for SSD storage.

Surging to the forefront of the Internet of Things (IoT) wave, the ASRock X10 is a revolutionary advance on old-fashioned internet gateway routers. It features ZigBee wireless for control, automation, scheduling and monitoring of home lighting, home appliances such as air conditioning, and home security systems. 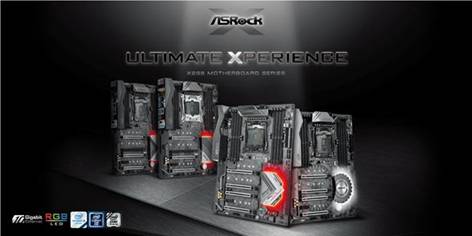 ASRock announces the new X299 series motherboard line up, featuring the latest and greatest technology as well as performance to exceed the ultimate experience.

ASRock will have something fresh for everyone at Computex 2017. Get in touch today and join us to see for yourself in Taipei, Taiwan, between May 30 and June 3, 2017.