Microsoft has introduced the Surface Pro 3, a tablet and also a notebook. The device has multiple processor, RAM and storage options intersect with a design that, with a simple snap or click, transform the device from a tablet to a full-functioning notebook, according to the vendor.

Starting at an estimated retail price of US$799, the Surface Pro 3 will be offered in multiple configurations featuring fourth-generation Intel Core i3, i5 and i7 processors.

Beginning June 20 in Canada and the US, Intel Core i5-based Surface Pro 3 will become available. Additional configurations will come later in August. 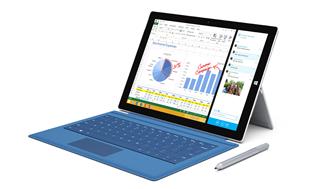