AMD has announced the availability of three products for the fabric computing, micro servers and data center technology segments. The first is a new chassis, AMD's SeaMicro SM15000 server, which extends fabric-based computing across racks and aisles of the data center to connect to massive disk arrays supporting over 5PB of storage capacity. In addition, AMD announced a new generation of compute cards for its micro servers based on AMD Opteron and Intel Xeon Ivy Bridge-based processors. These products continue the AMD tradition of providing industry-leading density, power efficiency and bandwidth for tomorrow's data center, the company said.

The SeaMicro SM15000 micro server, with its patented Freedom Fabric, enables the disaggregation of data center infrastructure. In combination with the newest generation of processors from AMD and Intel, it provides the highest performance-per-watt, the highest compute density and highest storage density, as well as the most bandwidth-per-unit compute of any micro server, AMD claimed.

With the new AMD Opteron processor, AMD's SeaMicro SM15000 provides 512 cores in a ten rack unit system with more than 4TB DRAM and supports up to 5PB of Freedom Fabric Storage. Since AMD's SeaMicro SM15000 server is ten rack units tall, a one-rack, four-system cluster provides 2,024 cores, 16TB of DRAM, and is capable of supporting 20PB of storage. The new and previously unannounced AMD Opteron processor is a custom designed octal-core 2.3GHz part based on the new "Piledriver" core, and supports up to 64GB of DRAM per CPU. 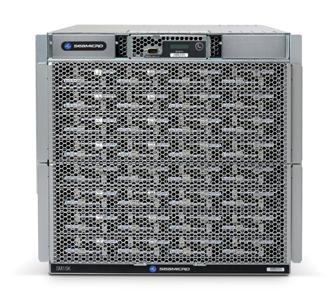