While originally scheduled for a one day November 4 trip to Taiwan, Microsoft CEO Steve Ballmer slipped into Taiwan late November 3 amid little fanfare. Ballmer came to Taiwan to help Microsoft celebrate its 20 year anniversary on the island.

Although Ballmer arrived at the smaller and less internationally used Sungshan Airport in downtown Taipei, the local media was still there waiting for him. If any of the reporters covering Ballmer's arrival hoped to catch a tired, grumpy and jet-lagged Ballmer, they were surely disappointed. Despite the late hour, Ballmer remained his usual energetic self, praising the performance of the local Taiwan office and stating that the local weather was "pretty darn great."

The understanding was that Ballmer's whirlwind Taiwan tour would include a morning meeting with Taiwan president Ma Ying-jeou and a keynote speech at a Microsoft event where he would participate in a forum with leaders from Taiwan's Legislature and Ministry of Economic Affairs (MOEA) as well. Ballmer may also meet with handset maker HTC in the evening before jetting off to his next destination. 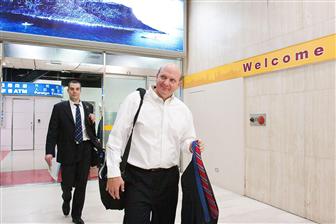