HP is also considering introducing 20-inch consumer notebooks in the Taiwan market by the end of this year, indicated sources at HP Taiwan.

With demand for business notebooks in Taiwan expected to pick up strongly in the September-November period, HP sees there is potential for large-size and tablet models, said Dennis Chen, general manager of HP Taiwan's personal systems group.

Sales of HP business notebooks in Taiwan grew by 80% on year in the first half of this year, and the company is aiming to have a 100% on-year growth in the second half, stated Chen.

Overall, the business notebook segment in Taiwan increased by 10% on year in the second quarter, Chen added.

In the Taiwan market, HP has outperformed Lenovo to become the number three vendor of business notebooks since the first quarter of this year, trailing only after Asustek Computer and Acer, Chen claimed. 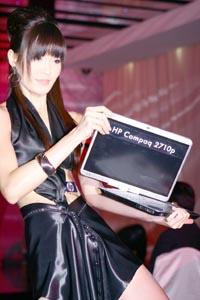