Elpida Memory has received Intel's validation for its DDR3 main memory based on the G33 chipset (Bearlake) reference platform. The testing validates that Elpida's DDR3 memory can run on Intel's reference platform and recognizes the excellent quality and reliability of Elpida products, said the memory maker.

Since completing development of its DDR3 SDRAM in August 2005, Elpida has been delivering DIMM samples and developing high-speed, low-power circuit technologies. Elpida has taken advantage of its development of DDR3 memory to proceed with the start-up of the DDR3 memory platform based on close cooperation between Intel and Elpida which has already resulted in the shipment of tens of thousands of sample DIMMs to Intel for validation testing.

Elpida believes that securing the Intel validation has demonstrated that it can quickly enable its next-generation DDR3 memory platform.

The first application of DDR3 memory will be in high-end desktop PCs but is likely to later replace DDR2 memory in notebook PCs and servers.

Elpida is now shipping SO-DIMMs for notebook PCs and is preparing for volume shipments of registered DIMMs for servers by making this product available to chipset vendors and major customers for evaluation.

Also, not only has the DDR3-1066 received Intel's validation but also operations of DDR3-1333 have been confirmed. The 1Gbit DDR3 memory using 70nm process technology will be coming soon, and will enable higher speed products like the DDR3-1600. 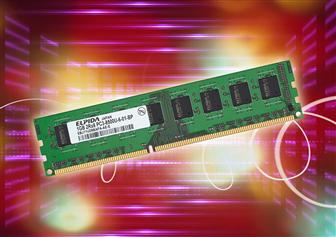