Acer unveiled its Ferrari 4000 carbon-fiber black Ferrari-series notebook in Taiwan yesterday, with the notebook expected to be available worldwide in June. The notebook vendor also stated it will introduce its Ferrari design into its line of n50 PDAs in the third quarter of 2005.

The company had previously released three Ferrari models to the market, with all of them being red.

The new 15.4" Ferrari 4000 is based on the Advanced Micro Devices (AMD) Turion 64 processor and features ATI Mobility Radeon X700 graphics with 128MB DDR memory, as well as a DVD Super Multi double-layer drive and a 5-in-1 card-reader.

Acer has projected sales of 90,000-100,000 Ferrari-series notebooks for this year, accounting for 1.8% of its total shipment forecast.

In addition, Acer recently reached an agreement with the Scuderia Ferrari team for marketing a new Ferrari PDA model, according to the company. Acer anticipates selling 200,000 PDAs in the first half of 2005, compared to less than 100,000 units in 2004.

Source: company, compiled by DigiTimes, May 2005.

Source: company, compiled by DigiTimes, May 2005. 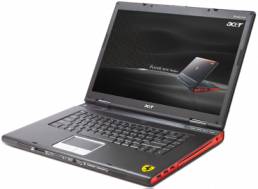