The Mega PC 865 Pro will be targeted to mainstream users and aims to take advantage of the convergence of PC and consumer electronics devices. Based on the Intel 865G chipset, the system features an instant-on DVD player, as well as support for FM radio and TV. MSI has also added new audio features to the Mega PC 865 Pro, as well as equipping it with a wireless 802.11g card.

The company introduced its first Mega PC SFF PC last year and the product line represents MSI’s goal to establish its own-brand in the market, as well as building up its barebones business.

This year, the company extended its barebones offering from SFF PC to more traditional barebones products, including ATX and micro-ATX units. Although a market leader in the motherboard market, MSI did not produce barebones units for the mainstream market until this year, and will now compete against Asustek Computer, Gigabyte Technology and First International Computer (FIC). In past years, MSI only produced barebones units for the vertical market, and the company still ships about 100,000 units per year to that segment. 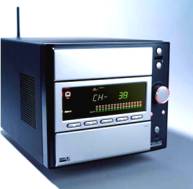