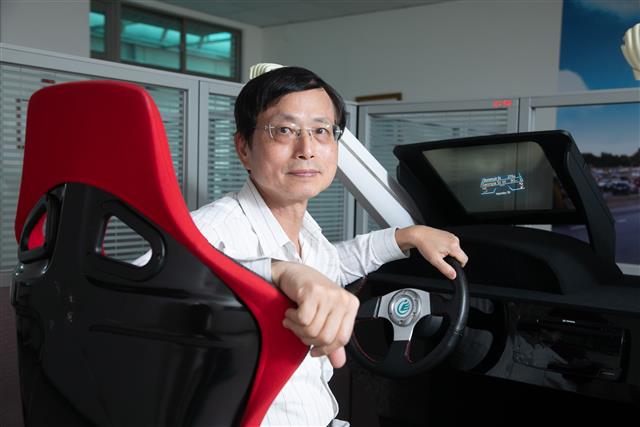 E-Led Electronic has patented a 3D AR head-up display (HUD) technology, which can be used to achieve holographic displays in the metaverse. Even though the popularity of the metaverse has reached the automotive industry, Hsi-Hsun Chen, chairman of E-Lead Electronic, is not jumping headfirst into the metaverse hype, believing it is hard to predict when exactly the metaverse will even truly be implemented.

Chen remains cautious when it comes to the automotive industry. This is because E-Lead has been involved in the mainstream global supply chain for decades and has seen how volatile it can be. In the end, it took E-Lead several difficult years before it was finally able to gain a firm foothold in the automotive HUD market.

Q: What do you think about the unlimited possibilities the metaverse could bring to E-Lead's 3D AR HUD?

A: I think we are still quite far from this becoming a reality, and I do not know when it will happen. Therefore, it is difficult to assess the development of the metaverse in vehicles.

However, E-Lead's 3D AR HUD can see 100-200 meters in front of the car and can reduce bulk. It can dynamically change to meet actual driving distance requirements, is cost-competitive, and has already reached the mass-production stage.

Q: The use of HUD in vehicles is not new and the penetration rate is low, plus large-screen displays have become more popular. Is it necessary to install HUD in vehicles?

A: The growth of larger screens and HUD are not actually in conflict with one another. HUD is an advanced display that mainly projects information onto the windshield of the car. HUD is situated in the best position for a driver to receive information, as it is in the driver's line of sight. It is convenient, fast, and increases safety. Without HUD, a driver must split their focus looking at both the road and gauges, which could lead to visual fatigue, driver distraction, and potentially increase other risks.

The MBUX Hyperscreen that Mercedes-Benz showcased at CES 2021 is equipped with a large AR HUD, which should be one of the most advanced HUDs in the world. When Mercedes-Benz announced its S-Class with AR HUD in 2020, it garnered the attention of the market. The focus was on the integration of the AR HUD with some of the advanced driver assistance system (ADAS) functionalities, which could carry out real-time road hazard warnings, road condition forecasts, and improve driver safety.

The introduction of HUD in new European cars will continue to grow faster. For example, HUD has been fully introduced into Volkswagen's ID series. China-based Geely has also introduced HUD into its vehicles. In the future, economy cars will be equipped with HUD, not just luxury cars. Furthermore, various brand factories in Europe, the US, Japan, and China are actively introducing HUD into their vehicles.

In the early days, HUDs only displayed speed and navigation information. However, with the advancement of technology in recent years, HUDs can now display the navigator's animations and maps as well.

Q: What limited the popularity of HUD in the past and how has it changed?

A: Previously, HUDs were mainly used in luxury internal combustion engine (ICE) vehicles, but popularization was limited due to bulkiness. From a cockpit point of view, HUD is just a small button, but behind this button are a lot of connections, which has affected its penetration rate.

From a comprehensive vehicle structure perspective, there were two main limitations to HUD adoption. First, HUD competes for space between the engine and the firewall. The firewall is located between the engine and the passenger cabin to protect the driver. Second, the steering wheel column cuts across the useable space. This column cannot be easily moved, which obstructs the available installation space for HUD.

Simply put, HUD strives for the feasibility to be installed in open spaces. HUD is just a straight line projection and cannot be easily moved to a more accommodating space, which was one of the main difficulties of early designs. Particularly since different car models and internal structures have different designs, HUD has been a test of design capability for original equipment (OE) factories and suppliers.

There are two ways of solving the HUD penetration rate problem: reduce the size of HUD and free up space for HUD. With E-Lead's 3D HUD technology, size is directly and effectively reduced.

The popularity of new energy vehicles (NEV) has also created a lot of space for HUD development. Particularly in electric vehicles (EV), the removal of the ICE has freed up a lot of space, which makes designing the HUD easier. This is expected to drive the HUD penetration rate.

Q: Will new entrants join the field if the HUD installation problem can be solved easily?

A: HUD competition is more intense than expected. Mainstream suppliers have been developing HUD for many years and there are certain technical barriers, making it difficult for new entrants.

You can look at HUD development from a perspective of penetration speed, but its growth in the mainstream automotive supply chain is historic. Once it has been decided a vehicle will be equipped with HUD, it is necessary to gather all of the relevant suppliers and work together. This includes the suppliers for the vehicle structure, windshield, gauges, self-driving, and even extends to the windshield material, optical components, and curvature design. All of these things must align with the OE's design. This typically takes about five years before it is applied to a vehicle.

If you look at it from a certification, cooperation with an OE, product qualification, and joint-design point of view, the threshold for new entrants is very high, as this is a time-consuming and challenging process.

HUD also has a technical advancement challenge. For example, to display a longer distance, the size will also increase. The subsequent addition of AR HUD will allow for more advanced capabilities, but will also come with many technical challenges. Using E-Lead's 3D technology will reduce the size.

Q: E-Lead is a pioneer in Taiwan's automotive electronics industry and has been working diligently in various global automotive supply chains for a long time. Taiwan is growing rapidly in this field. Are you worried about latecomers?

A: E-Lead started out doing car sound systems, which can be regarded as the predecessor to in-vehicle infotainment (IVI), and became the top potential supplier for the world's top three OEs. However, due to a high product defect rate from a certain PCB supplier, E-Lead paid several hundreds of millions (NT$) in compensation to OEs. At the same time, E-Lead was removed from the supply chain. The lawsuit with the PCB maker is still ongoing.

E-Lead's overnight downfall was painful. After reflecting on what had happened and starting over again from the beginning with certifications, E-Lead shifted into the ADAS and HUD segments. Currently, E-Lead is working closely with OEs in Europe, the US, and China.

In addition to entering the mainstream automotive supply chain, which is separate from mainstream OEs, E-Lead has obtained qualifications from OEs that have sent certifiers to Taiwan to conduct surveys. This has taken years to rebuild.

When it comes to visualizing the metaverse in future cars, it is hard to drum up excitement among suppliers in the main automotive industry chain in the short term. That is because suppliers are all too aware of the volatility of these processes.

Q: Many new future vehicle startups have been established around the world. How has this affected Taiwan's automotive electronics industry?

A: Many companies in Taiwan view the automotive industry as their main focus for the future. Honestly, I do not understand some of them.

I will address this from two directions. First, the scale of Taiwan's market is not large enough. Second, many Taiwanese companies only recently began investing in this industry and do not have experience in the industry.

For those companies that are eager to invest, it could just be a honeymoon period. The real test begins when they get into certification and mass production.

Everyone is optimistic about the development of future cars and view it as a competitive market. However, new entrants may not understand what the automotive supply chain does or what OEs care about. For example, new entrants may not fully grasp how difficult it is to meet vehicle safety standards.

Q: The IVI and ICT industries are closely related. Taiwan's ICT industry chain is both experienced and very strong. Could this help shorten the process?

A: IVI is the core development area for OEs and is the first stop for human-machine interface (HMI). Many driving experiences or generated car data will converge in this field. That is why many OEs are developing their own software and hardware.

Many influential European, Chinese, and Japanese car brands have established their own subsidiaries to invest in this field. This shows that it will not be easy for the average electronics company to enter the automotive sector, as brands made their own plans early on.

Of course, not every new vehicle will have navigation and advanced IVI. Taking into account geopolitics, regional development factors, and the different demands of each region, the automotive ecosystem will also adapt to local conditions. This is possibly one point of entry for the Taiwanese supply chain.

For example, in the Southeast Asia, India, and Brazil markets, international brand OEs often do not have full control. Instead, supply rights are won through joint ventures. If an international OE were to establish a factory in Indonesia, the brand would only hold 30% of the shares and the remaining 70% would come from Indonesian funding. Before, in China, foreign OEs could hold up to 49% of shares.

These regions require designated suppliers to participate with the original OE, which might be called original equipment suppliers (OES) or something different depending on the region. The key here is that the supplier must be in direct contact with the original OE and meet its requirements. This is just another system of the original OE. Even if it is designed and manufactured locally, it must be authenticated by the OE.

At this time, most of the cars in these regions do not have advanced IVI. If they do, the quantity is still very limited.