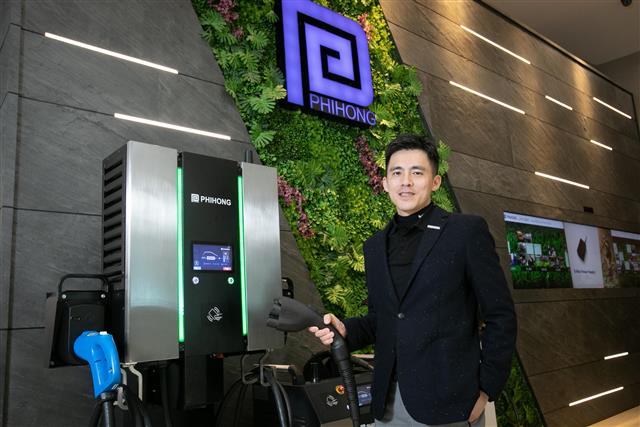 With 70% of its business coming from the US and Europe, Phihong will place an even bigger focus on overseas markets in 2022, said Lin. He noted that Taiwan has served as a great testing ground for Phihong's EV products but that it has come to a time for the company to actively expand its global reach.

Lin pointed out that Phihong's recent deal with Taiwan Cement Corp (TCC) was driven by the latter becoming a global supplier of high-end EV charging infrastructure after its subsidiary Taiwan Cement Europe Holdings (TCEH) acquired Italy-based energy storage company Engie Eps SA in July 2021. He said the deal was an opportunity for Phihong to expand its overseas business.

According to Lin, the two major strategies Phihong has adopted in recent years for overseas expansion are becoming a key charging equipment supplier for the world's second largest oil and gas company, Shell, and seeking partners from different industries.

According to Yang Wei-jie, director of Phihong EV Energy, Phihong will leverage customized products to expand its overseas presence. He said the company had supplied 90% of the EV chargers used by RAC Electric Vehicles' electric buses before RAC was acquired by Mobiletron, which produced its own chargers. Despite losing orders from RAC, Phihong had managed to stay competitive in the electric bus market thanks to its customized products, Yang said.

In 2017, Phihong teamed up with Noodoe to set up EV charging stations customized for Disney, Universal Studios, and other popular amusement parks in North America. Later, it began producing EV chargers for vehicles manufactured by Audi, Volvo, and Jaguar Land Rover.

Since December 2021, Phihong has been producing EV chargers for Shell in Europe, the US, Hong Kong, and South America. The company also collaborated with Audi to build six super-fast chargers in Taiwan in 2021.