In an interview conducted by Digitimes, Lu stressed that real-time transmission will play a key role in determining the success in the AR domain in the 5G era, and that solid hardware support also counts greatly for AR applications in people's daily life.

Q: Why did you migrate to the industry AR segment after 10 years in the gaming segment? What is the difference between gaming and industry AR?

A: I witnessed the changes of the gaming sector during my 10 years in the sector. Mobile games started to emerge after Apple released its first 3G iPhone in 2008, but not until 2013 did large capital funds start to enter the sector, leading to the birth of large-size gaming enterprises such as Tencent and NetEase in China.

The leading firms tended to acquire work teams and IPs of smaller firms that develolped gaming products with great sales potential. As a result, many independent gaming studios were acquired or failed.

I found that AR can allow interactions whether it is applied to games or general industries. But for gamers, AR interactions can mainly bring them new gaming experiences, such as Pokémon GO. For industries, AR can help tackle their long-existing pain points. E-commerce operators, for instance, can use AR to develop visual apps for consumers to try shoes on via their smartphones.

Q: How do you see B2C and B2B AR applications? What business model is adopted by your own platform?

A: For AR glasses, B2B is the dominant business model, with such glasses having four main application scenarios including repair workshops, production plants, on-site inspection and security operation. I think future B2B AR applications will move closer toward large-size businesses and government units.

As to the B2C business model, it can make an AR platform grow quickly, but the ratio of subscription payment by consumers will not necessarily rise with the platform usage growth.

Our MakAR editing tool, designed to help enterprises create AR content to serve consumers, adopts the B2B2C model, meaning that businesses pay the cost for the services to consumers.

Q: How will 5G affect the development of VR and AR application to industries?

A: 5G will certainly have immediate influence on VR, as high-quality games will no longer be downloaded and can be directly played in the cloud, and high transmission performance of 5G can concretely match quality VR content.

The influence of 5G on AR is not so clear for the moment. But when AR identification technology SLAM (simultaneous localization and mapping) is applied to process bigger data in shorter time before generating application content, 5G real-time transmission will be critical to supporting the application.

Q: Besides the support of 5G transmission capability, what other crucial aspects will spur the development of the AR industry?

A: In order for AR applications to be materialized in our daily lives, the popularity of hardware AR glasses also counts greatly. Though AR applications are operated via handsets, the most intuitive interface will remain AR glasses, which can also better integrate the virtual and physical realities. 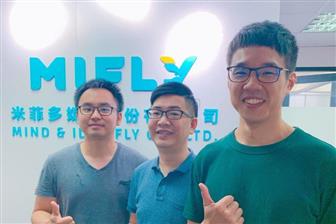 Tags
5G B2B B2C CEO gaming Interview multimedia startup
Share this article
Other links
Print
Related content
Related stories
DDTMAP to launch WebAR platform for furniture purchases
AR/VR market to take off in 2021 on 5G commercialization
Worldwide spending on AR/VR to reach US$18.8 billion in 2020, says IDC
IT product developments in 5G era
Mifly launches AR editing platform to tap enterprise segment
Related topic
Face to face
Innovations
Opinions
Looking for startups?
Startup database
Profiles of startups from Taiwan and around the world: their technologies, product developments, fundraising rounds, etc. All startups are welcome to register their profiles - free of charge.
Register
Accelerators & incubators
Information about accelerators and incubators from Taiwan and around the world that are mentoring startup businesses and teams. All mentors are welcome to register their info - free of charge.
Register
Events calendar
Major events, including those organized by the government, DIGITIMES, and others, featuring startups, innovative technologies and products from Taiwan, Asia and around the world.