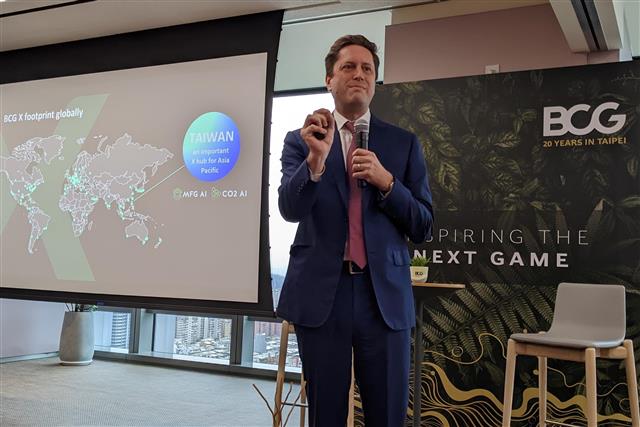 Although 94% of the 4,000 companies in 30 countries responded in a survey they want to achieve substantial and rapid impact in business model transformation and sustainability, and 60% said they will continue increasing investments in digital transformation in 2023, chances are, only one-third of them will succeed.

Jeff Walters, the BCG managing director and senior partner who leads its Technology and Digital Advantage (TDA) unit in Asia Pacific and BCGX (Tech build and Design Unit) in Greater China, said in an exclusive interview with DIGITIMES Asia, most companies embark on digital transformation fail, and there are two most common mistakes.

Waiting for data cleaning and ready-to-build data is mistake No.1. "Data is important for AI, so they set up a team for data collection, data governance and data cleaning. And they believe when all of their data is perfect, then they will start doing AI. And then two years later, probably their data is still not perfect," said Walters. "Actually, for AI-driven data transformation, I would say in 80% of situations, there was enough data to get started. And oftentimes the most valuable data is what you're creating during experimenting."

Mistake No.2 is buying a lot of technology first, which is a mistake tons of companies make. "There's a view that says, the first thing I need is a very strong, foundational, certain ERP systems and CRM systems, and need to move from on-premise to cloud. And once I set that foundation, you know, then then I'll be ready for a transformation." Walters shrugged. "What happens is three years later, they will have spent a ton of money on a technology foundation, yet their business looks exactly the same."

Companies should build those pieces as they go along. And then if two years later, they invested maybe US$10-15 million in technology, but created a US$100 million bottom-line impact, and the P&L is better while having learned and accumulated a lot of experience on how to make things happen, that will make the organization excited about transformation, said Walters.

"Another common failure mode is what we call the flies versus the elephant. Some very ambitious and smart CEOs start with 50 initiatives. And those are like 50 flies, when you put 50 flies together, you weigh it with nothing," said Walters.

What would be more impactful is having only three most important things be powered by AI and continue progressing for the next three years. That's like three elephants, and each of them weighs thousands of kilograms. "There is quite a lot of learning companies have to go through to make that shift."

BCGX global team is over 2700 people, and 800 in Asia Pacific. There are two areas that BCGX is particularly focused on in Taiwan, the home of some of the most advanced manufacturer in the world, which is Manufacturing AI and CO2 AI.

"We are not tech vendors, we partner with our clients to deliver business results," Walters said BCG brings in the ability to diagnose recalled problems and change organizations, while BCGX brings in software toolkits and patented technology. "We look specifically on stronger terms of investment in the balance sheet and the P&L. And specifically when we look at the building, and transforming the sort of AI-driven manufacturing the future, we see 5-10% major productivity gains, 20-40% measured reductions in non-value-added work, 20-30% reduction in time to onboard new operators. So you see a sort of slobbers over 98%."

In the CO2 AI domain, BCG works with many leading companies around the world, carefully and accurately measure their Scope 1, 2, and particularly Scope 3 emissions and then based on such good baseline build programs and optimizations to help them effectively and economically meet their co2 goals, such as net-zero by 2030, said Walters.

"On the mainland China side, we have been helping clients very smartly, create what we call the "China for China tech stack" because there's obviously a lot of new regulations that have come in, in the past year around privacy, about data that can be moved across the border, etc.," according to Walters.

He explains that the digital ecosystems of mainland China and the rest of the world are so different, so to be competitive, firms probably needed a different tech stack anyway. "But then, of course, companies have consolidated financials, and need to share certain data within regulations. And then how do you build that connectivity? So that's actually been a very interesting and almost China-unique topic," said Walters. And the second piece is obviously we continue to advise companies that are playing the more sensitive technology areas, on how to manage the increased complexity that the new barriers, the new regulations from Europe, US, and China, right now are all creating.

When talking about the dramatic change in a world wrought with uncertainties in geopolitical tensions, climate change, and tech de-coupling, Walters took the analogy of F1 cars cannot win the rally car races in a time of uncertainty made by Francois Candelon, global director of BCG Henderson Institute, to stress the importance of building different mindsets and capabilities for resilience. "We're going to be living with this complexity for decades, and most managers and leaders of companies have grown up in a world without this complexity," said Walters. "Most leaders today, know how to run that F1 car, but don't know how to run that rally car. So it is a massive transformation of mindset and capabilities."