The Taipei City Government, via cooperation with Turing Drive, will begin trial run of autonomous electric buses on a designated road in the city at midnight in May 2020.

Turing in 2019 applied with Ministry of Economic Affairs (MOEA) for a one-year project to experiment technological innovations in unmanned vehicles, and obtained approval in February, the city government said.

Turing is the coordinator in the project, which also consists of ThinkTron, which is responsible for establishing high-resolution electronic maps; International Integrated Systems for connecting the trail run with the city's traffic lights information system; AIMobile for installing cameras at road intersections; Tron-e Technology for making the autonomous electric buses; and Trillion Green Energy for designing a control system for the vehicles.

In March and April will be preparation for the trail run, mainly readying two 6m-long autonomous electric buses and a 4m-long one, establishing high-resolution electronic maps and installing detection systems at intersections of roads, the city government noted.

The three autonomous electric buses will be in POC (proof of concept) experiment to test their response to various scenarios during May-August, with technical staff members on board but no passengers. Based on results of the POC experiment, POS (proof of service) trials with passengers will be conducted from September 2020 to February 2021. 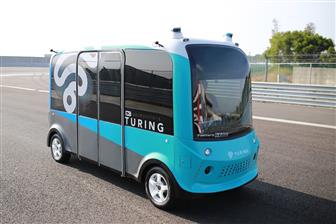 A 4m-long autonomous electric bus that will be tested in Taipei
Photo: Taipei City Government

Tags
IT + CE Server, IPC, cloud computing, IoT Software, big data Taipei
Looking for startups?
Startup database
Profiles of startups from Taiwan and around the world: their technologies, product developments, fundraising rounds, etc. All startups are welcome to register their profiles - free of charge.
Register
Accelerators & incubators
Information about accelerators and incubators from Taiwan and around the world that are mentoring startup businesses and teams. All mentors are welcome to register their info - free of charge.
Register
Events calendar
Major events, including those organized by the government, DIGITIMES, and others, featuring startups, innovative technologies and products from Taiwan, Asia and around the world.
Latest Digitimes news
Around the web
Interviews
Topics
Quarterly research reports