One of the major themes of Computex this year is "Gaming" and the introduction of PCIe 4.0 is generating a lot of excitement. Phison Electronics, the world-wide leader in SSD storage, proudly announces the arrival of the first PCIe 4.0 SSD. The PS5016-E16 is fully aligned with AMD X570 chipset motherboards. The improved performance and reduced latencies of PCIe 4.0 enabled solution will bring enhanced realism to the gaming world.

KS Pua, Chairman and CEO of Phison, said "Working with AMD has enabled rapid innovation and expansion of the PCIe 4.0 ecosystem. The PS5016-E16 is the world's first Gen4x4 NVMe SSD controller IC. When combined with AMD X570 motherboards, this storage solution is ready to meet the high bandwidth requirement of 8K HD gaming." 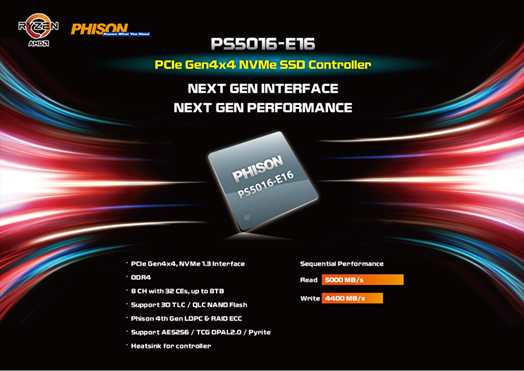