Data collected by fish-eye cameras can be used to identify road intersections where traffic jams are easy to happen, analyze the causes, and then traffic lights are adjusted to reduce traffic congestion, PiXORD said.

Such data can be combined with data collected from CCTVs, vehicle detectors and eTag as well as handset signaling to build traffic flow parameters, PiXORD noted. Then, intersections of roads are graded in terms of traffic importance based on these parameters and traffic lights are comprehensively regulated based on AI to reach the most smooth traffic flows and minimize traffic congestion, PiXORD indicated.

In addition, PiXORD has cooperated with Leotek, a LED street lighting business group under EMS provider Lite-On Technology, to install fish-eye network cameras at street lamps in the city for security surveillance and monitoring of pedestrian and vehicular flows. 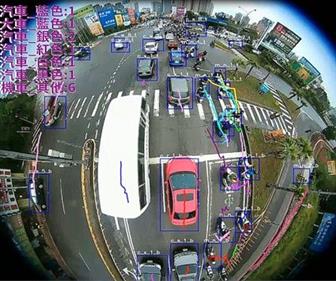 360-degree monotoring of traffic flows by a fish-eye network camera at an intersection
Photo: PiXORD