Nvidia has opened the door to the development of a new generation of applications that employ computer vision, image processing and real-time data processing - with the launch of a developer platform based on a mobile supercomputer for embedded systems.

The Nvidia Jetson TK1 Developer Kit provides developers with the tools to create systems and applications that can enable robots to navigate, physicians to perform mobile ultrasound scans, drones to avoid moving objects and cars to detect pedestrians.

The Jetson TK1 Developer Kit includes a full C/C++ toolkit based on Nvidia CUDA architecture, making it much easier to program than the FPGA, custom ASIC and DSP processors that are commonly used in current embedded systems.

At the heart of the Jetson TK1 Developer Kit is the Tegra K1 mobile processor, Nvidia's 192-core chip built on the Nvidia Kepler architecture.

Jetson TK1 is the first developer platform for the Tegra K1, which was unveiled in January at the International Consumer Electronics Show (CES). It includes 2GB memory and input/output connectors for USB 3.0, HDMI 1.4, Gigabit Ethernet, audio, SATA, miniPCIe and an SD card slot.

It comes with a board support package and software stack, including OpenGL 4.4, as well as CUDA and the VisionWorks toolkit. It also includes a complete suite of development and profiling tools, out-of-the-box support for cameras and other peripherals, and Nvidia's partner support networking including Avionic Design, GE Intelligent Platforms, ICD, SECO and Toshiba DME. 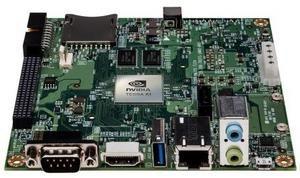