Liu further explains that the enterprise network is made up of three layers, which are intranet, plant network and industrial process control network, or process control network for short. Industrial firewalls' main purpose is to protect the industrial process control network, which monitors and controls all the internal nodes and ensures that all the nodes are functioning in optimal condition. Although the network bandwidth at this level is not excessively demanding, the transmitted data is highly valuable, such as monitoring variables used to assess the level of alkalinity in wastewater treatment plants, or control variables used to control industrial robots in factories. Therefore, industrial firewalls need to support various Fieldbus protocols such as PROFINET, as well as provide deep packet inspection in order to inspect and analyse the header and payload encapsulated at different layers of the packet to ensure integrity.

In contrast, commercial firewalls do not support Fieldbus protocols and they focus on inspecting packets that are based on common communication protocols such as email, file transfer and web browsing, making them unsuitable for industrial process control networks.

For example, at an automotive assembly line, the industrial robots function as network nodes that operate according to the control command received. If the packets sent to them contain suspicious instructions, such as instructing the industrial robots to perform actions that are not part of the standard operating procedures, the automotive manufacturer may suffer huge financial losses due to the mass production of inferior products caused by compromised nodes. By incorporating industrial firewalls, any suspicious packets can be identified and blocked, preventing the control command from being tampered with and ensuring the industrial robots are operating as programmed at all times.

In addition to a whitelist, virtual private network (VPN) is also another important feature for industrial firewalls. As industrial process control networks are converging to Ethernet, information will be exchanged in an open network environment. To ensure the information received from a remote site is complete and authentic, VPN will create a private channel on the public network and encrypt all the information within, even if the data is eavesdropped during transmission, the data will be difficult to decrypt and tamper with.

There exists a diverse range of industrial automation applications, such as oil fields in hot deserts, steel plants that are exposed to scorching heat and wind farms in salt fog environments. To withstand these extremities, industrial firewalls require a rigid and robust design to maintain reliable operation under high temperature, high humidity and high salt environments. Moreover, a heavy emphasis on stability with low or no downtime is required from each production node especially during critical production processes. Thus, industrial firewalls must provide high availability by featuring redundant mechanism that can resume operation within a short amount of time to provide constant protection of the industrial process control network.

Using Ethernet, intelligent factories are able to monitor and manage the entire plant operation from a remote location in real time. From a managerial point of view, Ethernet-based intelligent factory is a valuable asset to improving a business' manufacturing and management efficiencies. However, from a security point of view, any security breaches cannot be tolerated. Ever since the cyber attack on Iran's nuclear power plant in 2010, industrial users have realized the importance of industrial process control network security. In the quest of protecting the value of production nodes, industrial firewalls are recognized as the key solution. With great development potential, the future of industrial firewalls is bright ahead. 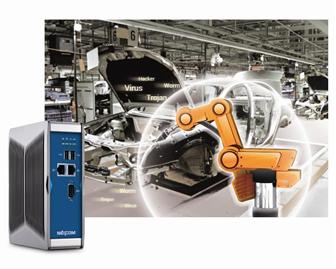 It requires an industrial firewall to secure sensitive and critical data exchanged in industrial process control networks and provide a deeper level of management and protection of nodes.