Now, the demand for high resolution and intelligent video analytics are growing; the design of the products is shifted from general-purpose towards specialization for vertical applications; IP surveillance is emerging as mainstream and gradually replacing traditional analog CCTV and DVR systems.

IP surveillance is becoming mainstream because it surpasses CCTV and DVR systems in many ways. NEXCOM General Manager of Intelligent Digital Security Business Unit, Steve Yang, explains that by digitizing analog signals, IP surveillance can achieve higher resolutions and perform intelligent video analytics, and by integrating network structure, IP surveillance allows monitoring and data storage across multiple locations as well as centralized management of thousands of IP cameras. Yang also highlighted that to seize opportunities and succeed in the vehicle surveillance industry it is essential to address the aspects of video capture, transmission, recording, monitoring, system integration and centralized management.

The variable nature of vehicle environments also poses several challenges for video capture. For example, if a vehicle is moving at a fast speed and captured at a low frame rate, the on-screen motion will appear choppy. "In vehicle surveillance applications, 60 FPS is recommended over 30 FPS for smooth playback," Yang states. Another challenge that IP cameras need to overcome is camera shake caused by vehicle movements. To reduce camera shake, IP cameras require intelligent analysis that uses image stabilizing algorithms to detect and reduce horizontal and vertical movements.

In addition, as the vehicle's exterior and interior are exposed to high and low lighting levels, some areas within the camera's field of view may be too bright or dark for optimum viewing. Cameras supporting WDR can resolve this issue. "Using a combination of long and short exposures, WDR reduces the brightness of the background to ensure that the subject in front is clear, while balancing excessively dark and low areas to an optimal contrast ratio. Compared to DWDR (Digital Wide Dynamic Range), WDR produces sharper, clearer images," Yang explains.

When it comes to transmission, recording and monitoring, vehicle surveillance requires high mobility to adapt to its application environment. Traditional analog systems rely on coaxial cables to transmit camera footage to DVR systems for recording. However, as the transmission distance is limited by the length of the coaxial cables, the footage can only be monitored and recorded from a single location. IP surveillance, on the other hand, uses Internet Protocol (IP) to transmit video stream over the "boundless" internet, allowing for remote backup and real-time view of video across multiple areas.

Furthermore, vehicle surveillance can incorporate Wi-Fi access point to reduce cabling and simplify system setup, or integrate in-vehicle computers to collect vehicle information and capture surveillance footage. The data are then uploaded to the backend central management system (CMS) to give the security personnel a clear, real-time view of the monitored area and detailed information about the vehicle, allowing them to gain a better control of the situation at hand.

In terms of surveillance management, traditional analog-based systems rely on DVR to digitize and compress analog footage before it can be used for video analytics, not only does this place stress on the DVR system and cause a delay in video, but also a delay in the alarm system or other reactive security measures. In contrast, IP cameras are equipped with built-in video analytics to assist the system in identifying abnormal events, offloading workload from the backend system to ensure more timely alarm notification and faster video retrieval.

The need of vehicle surveillance is prevalent in various transportations. Yang points out that public transits such as buses, trains and school buses can use vehicle surveillance to monitor entering and exiting passengers, activities in the vehicle and blind spots in the side-view mirrors to prevent graffiti, harassment and theft, improving passenger transport safety. In addition, the speed and route of vehicles can be closely monitored and recorded to detect and prevent improper driving behavior. In law enforcement, vehicle surveillance can monitor the police enforcement process, or use video recordings as evidence for prosecutors to press charges. Moreover, in the event of police-citizen disputes, the recordings can be used to recall the actual scene, providing concrete evidence to justify conflicts.

With a long established experience in all types of vehicle environment, NEXCOM offers a comprehensive solution including IP cameras, video recording systems, GPS and industrial grade Wi-Fi access points, to meet all types of surveillance needs. 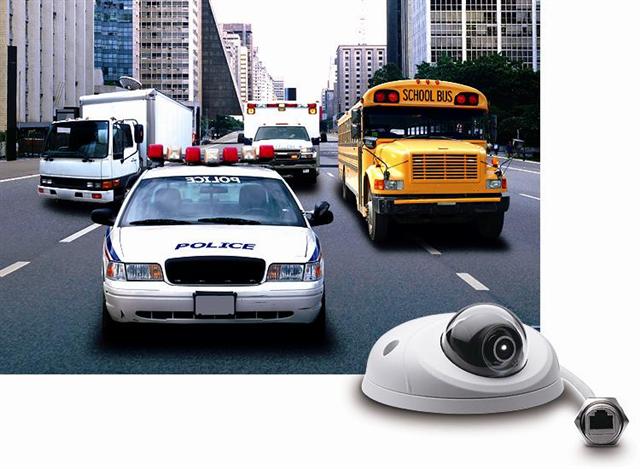