The core temperature and sound level of the MSI GTX 650Ti BOOST Twin Frozr is just 65°C and 25.37dB when operating at full capacity, the perfect balance for an optimum gaming environment. Through MSI's exclusive Afterburner overclocking utility, the new Gaming graphics card's performance can be boosted by simply adjusting power and timing. NVIDIA 3D Vision Surround technology and up to 4 display outputs from a single card are supported as well, delivering the best gaming and multi-tasking experience that an enthusiast can have.

The GTX 650 Ti BOOST Twin Frozr is the first product released by MSI in its new Gaming series of graphics card. The dragon on the box, MSI's Gaming logo, symbolizes the explosive performance lying dormant within that gives gamers the edge in their games. When combined with the Twin Frozr III cooling module, the perfect balance between temperature and sound makes the best possible gaming environment a standard part of gaming.

MSI's Twin Frozr III cooling design has proven its worth through rigorous testing by professional media. The proprietary Propeller Blade technology, patented in multiple countries, incorporates special air-flow channels into the edge of the fan blades to not only increase cooling coverage but also boost air flow by 20% over conventional fan blades for even better cooling! Under a full load, the core temperature of the MSI GTX 650 Ti BOOST Twin Frozr graphics card is just 65°C and noise during operation is only 25.37dB as well, clear proof that MSI products not only help gamers stay cool but also keeps the noise down for the best user experience!

The MSI GTX 650 Ti BOOST Twin Frozr graphics card supports NVIDIA GPU Boost technology that dynamically adjusts the graphics card's operating frequency to optimize gaming performance. When used with MSI's exclusive Afterburner overclocking utility, gamers can adjust the power and timing at will to tap into the maximum overclocking performance. Afterburner also incorporates the free Predator game video capture function. Desktop PCs can also be remotely controlled via a smart phone. Add one-touch burn-in and benchmarking with Kombustor and you have a graphics card overclocking utility that no gamer should do without.

In addition to supporting the latest DirectX 11 standard, 3D Vision Surround technology means MSI GTX 650 Ti BOOST Twin can create a triple-monitor 3D surround environment on just one video card. Players that have 3D display monitors and 3D glasses will be able to enjoy the full visual experience offered by 3D games or movies. With up to 4 display outputs from a single card is also supported, gamers can enjoy the multi-tasking benefits of multiple display setups while enjoying their games. 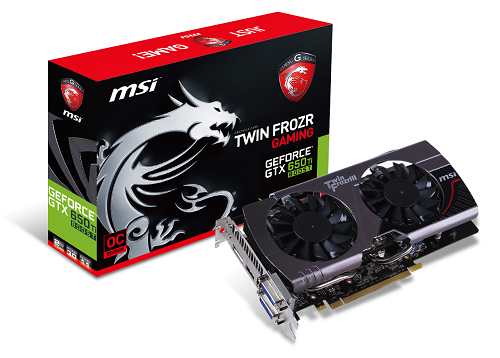