Due to its high reliability, Compact Flash has been hugely successful as a memory card format for industrial applications. In recent years, The CompactFlash Association has come out with similar form factor designs based on Serial ATA (SATA) instead of Parallel ATA (PATA) in order to raise the efficiency of Compact Flash. Unfortunately, system integrators have had to design layouts for new form factors, which require new motherboard designs of 7+17 pins and increases the cost of parts. In addition, CF cards with PATA interface are set to be phased out sooner than those with SATA interface. Naturally, the industry has found it a big headache transforming CF-PATA to CFast.

InnoDisk has stepped up to the challenge and delivered a product that not only fulfills the industry's needs, but goes beyond. Its CF-SATA has been able to leverage the SATAII interface and with 4 channels boasts read/write speeds of up to 120MB/Sec and 95MB/Sec respectively - 3 times faster than CF cards.

InnoDisk's CF-SATA provides several high-end product features such as a built-in LED light which notifies users on the health of the CF-SATA. InnoDisk's CF-SATA also comes with a Write Protect Switch for data read-only setting. 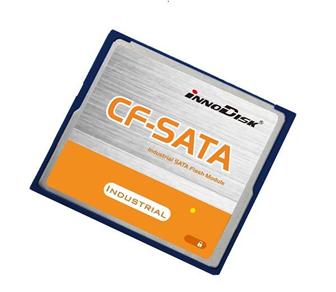