AMD has introduced its next generation mobile graphics technology, the AMD Radeon HD 6000M series, delivering AMD's highest performing notebook graphics for those who want to experience games, entertainment, and productivity on the go. 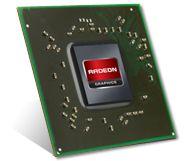