Biostar Microtech International has unveiled a top of the line motherboard for next generation Intel platform-TPower X58 based on Nehalem architecture.

The 12-phase power design will provide highly efficient power control to generate less heat than traditional solutions. This design helps to extend component's lifecycle and system stability when CPU is under heavy loading or in overclocking mode. Green power utility will progress energy efficiency by disabling extra phases while CPU on light loading. 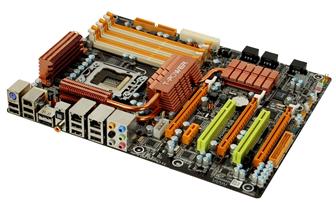