BenQ recently announced the launch of what it claims is the world's slimmest 8-megapixel camera, the BenQ X800.

At 9.8mm thick, the X800 is equipped with a 3-inch LCD display. The digital camera has a Prism Type 3x optical zoom lens, Face-Tracking and Super Shake-Free modes. The portable media player function of the device also allows consumers to watch video and listen to digital audio, according to the company.

When zooming in on an image, all of the movement of the lens takes place inside the camera, which also has a 1cm micro shooting function. The X800, with its built-in MPEG-4 format, can record 30 frames per second at 640×480 VGA resolution and can capture images using up to an ISO 4000 setting.

The BenQ DSC X800 will be available worldwide in the first quarter of 2008. 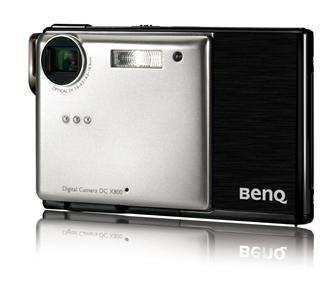