Asustek has announced the Silent Knight 2 CPU cooler that utilizes 100% copper for its fins, base and heat pipes; and dynamic fan speed control to deliver efficient heat dissipation for the latest quad-core processors.

The Silent Knight 2 is an all-copper CPU cooling solution that utilizes the natural heat conducting properties of copper. With its large heat exchange area, lightweight design to relieve stress on the motherboard, and six curved heat pipes to transfer heat to the fins, processor temperature is maintained at levels most suitable for high-performance and reliable computing, said Asustek. Additionally, the Silent Knight 2 also incorporates a PWM function fan that automatically modulates fan speeds according to the CPU temperature. 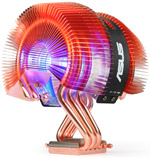