VIA Technologies announced the VIA EPIA LT-series Mini-ITX motherboards based on the VIA CX700 system media processor. Powered by a 1.5GHz or fanless 1GHz VIA C7 processor, the VIA EPIA LT has a maximum operating power consumption of less than 20W.

The VIA EPIA LT motherboards incorporates a number of features for the fast-growing x86-based embedded market, such as greater device performance, clearer definition video and storage technologies, and a full feature I/O set including two LAN ports and native support for two LVDS panels, four COM ports, a PCI slot and up to six USB 2.0 ports, according to the company. Project-based customers also have the option of a VIA CX700M2 version with added TV-out functionality.

The VIA EPIA LT-series motherboards will enter mass production in July, with pre-release samples available to VIA project-based customers immediately. 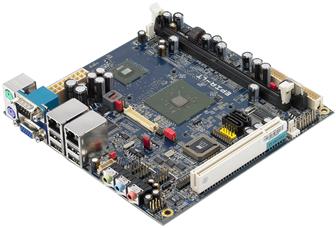