Computex 2007: Shuttle goes back to barebones with ten new products

As one of the pioneers of the small form factor (SFF) PC, Shuttle built success upon its distinctive XPC range of products and was at one time the market leader in its field. However, in recent years, the company's performance has taken a rapid downturn with sequential revenues drops of over 45% for two consecutive years to reach just NT$1.6 billion in 2006, the lowest recorded in over five years. What went wrong and how does the company plan to swing back to success in 2007?

The first half of 2007 has been a quiet period for Shuttle with only a single product launch and very little in the way of PR, (Shuttle was notably not present at CeBIT 2007) but at Computex Taipei the company is coming back with a bang and is announcing ten new products.

The first thing you notice when you look at the new product lineup is that they all fall into the XPC barebones category. In recent years Shuttle has deviated from its core business to focus on system products, notably the M-series home theater PC (HTPC), and the X-series ultra-small form factor PC. The key difference between these products and Shuttle's previous offerings was that they were based on mobile CPUs and chipsets, and as a consequence offered less upgradeability and performance than comparatively priced desktop CPU based products. When asked, a Shuttle spokesperson would not go as far as to say that the turn away from XPC barebones to focus on systems was the reason for the recent financial downturn, but did admit that those system products took up a lot of resources in R&D, sales, and after sales service, while not meeting targets in terms of sales.

While Shuttle may have been quiet in recent months, looking at the specifications of the new XPCs shows that the company has not been sleeping. All of the new products are based on the latest chipsets from Intel and Nvidia and so offer comparable features as the full-sized desktop motherboards which are being launched by Asustek, Gigabyte, and Foxconn, among others, during Computex, such as support for upcoming Intel and AMD quad-core processors, PCI Express 2.0, and HDMI. The new products also feature solid capacitor designs, a trend that has become increasing popular in the industry as they offer higher reliability.

At the show Shuttle is also introducing two new chassis designs, the G6 and P3, aimed at the fashion conscious and high-end and markets respectively. The G6 features a band inset with several dozen crystals for a distinctive look. The P3 is very similar to the older P2 design, but it also features an access plate on the bottom which allows mini Card based add-in cards to be installed in the system. The company will also introduce its new Oasis cooling system which will be used on high-end systems to provide extra cooling for the chipsets and MOSFETs, and a feature the company calls Speed Link which allows an XPC with the technology to be connected to another PC via a standard USB cable for simple file transfers.

On the marketing side, Shuttle is also introducing three new sub-brands, Prima, Glamour, and D'VO which will be used to differentiate its high-end, mid-range and HTPC product lines, and a tweaked product naming scheme which the company believes will help customers identify products as the chipset used is now part of the name.

The majority of the products Shuttle is launching are based on the Intel 3 series (Bearlake) chipset to support upcoming 1333MHz FSB CPUs including the Core 2 Quad. At the high-end is the SX38P3 Deluxe based on the X38 and ICH9R north and southbridge combination. The barebone features two PCI Express (PCIe) 2.0 slots and supports AMD Crossfire, as well as up to four DDR2 memory modules. Shuttle is aiming this product at the enthusiast market and has put extra effort into supporting advanced features such as overclocking. In addition to the Oasis cooling system and solid capacitor design, Shuttle has also tried to improve the system BIOS, including sending two of its engineers to receive training with Intel.

The deluxe in the product name indicates that the barebone will come with extra add-in features and accessories, including Wi-Fi and Bluetooth support, and a fingerprint reader.

On the audio side the product includes support for Dolby Digital Live and DTS Connect. Shuttle recently partnered with the two audio companies and will hold a special press event during Computex at its VIP lounge to promote the newly added features.

The SP35P3 Deluxe is similar to the SX38P3 but is based on the P35 northbridge and so only supports a single PCIe slot.

The SG33G5M Deluxe is aimed at the home theater market and includes Shuttle's front-panel VFD display and remote control. The barebone is based on the G33 and ICH9DH chipset combination and supports the Intel Viiv platform. Intel GMA 3100 graphics are onboard with support for high-definition (HD) video, DirectX 10, and Windows Vista Premium. The model is the first SFF system to include an HDMI output, according to Shuttle.

Two further models, the SG33G6 Deluxe and SG33G5 are based on the same motherboard as the SG33G5M and so offer similar features, with the front-panel chassis design being the main difference.

For the value segment Shuttle is introducing the SG31G2 based on the G31 chipset and the SD30G2 based on the older generation 945GC chipset which so does not include support for newer CPUs. Both systems offer onboard graphics via the GMA 3100 and 950, respectively, with VGA output, while the SG31G2 also features a DVI port.

For AMD platforms Shuttle is releasing two products, the SN68PTG6 Deluxe and SN68SG2, based on the Nvidia GeForce 7050 and nForce 630a chipset combination. But models support AMD Athlon and Sempron CPUs plus the upcoming Phenom series. The SN68PTG6 also includes an HDMI video output as well as better audio features including Dolby and DTS.

Shuttle expects the new models to begin shipping starting in July with roll out to be completed in August. 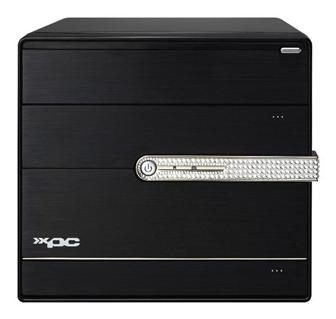