For more advanced searching on a compatible PC, users can use the camcorders' bundled Picture Motion Browser software to access the highlight index. It incorporates a search engine for voices and colors as well as faces so people can quickly get to the scenes they want to watch. All three models incorporate Sony's ClearVid CMOS sensor technology.

The models' supplied Handycam Stations include a One Touch Disc Burn button for easy DVD creation using a PC and the bundled software. These stations now feature HD component output for instant connection to a compatible HDTV set when the camcorders are cradled.

High-definition content recorded on standard DVDs can be played back on compatible Blu-ray Disc devices, PlayStation 3 (PS3) and standard DVD drives on compatible PCs with the models' bundled software. The next-generation Sony DVDirect recorder will also be compatible with these camcorders for HD video transfer to standard, 5.25-inch DVDs. The HDR-CX7 unit's Memory Stick PRO Duo or Memory Stick PRO HG media cards, featuring high data transfer rates, can also be played back directly on compatible PCs and PS3 by a system software update scheduled in the summer of 2007.

The HDR-SR5, HDR-CX7 and HDR-SR7 camcorders will ship in June for about US$1,100, US$1,200 and US$1,400, respectively, with an array of optional accessories. All will be available at Sony's online store, in Sony Style retail stores, and at authorized dealers throughout the US. 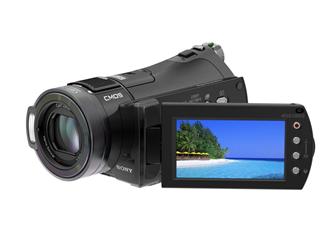