Albatron Technology has unveiled what it claims is the first Mini-ITX motherboard based on AMD's AM2 socket technology. This small board goes all out with all of the latest technologies matching AM2 power with versatility and flexibility, making it a top choice as the most powerful Mini-ITX board on the market, says Albatron.

The AM2 socket supports a full range of AMD CPUs including the Athlon 64 FX, Athlon 64 X2, Athlon 64 and Sempron.

The KI690-AM2 is a Mini-ITX board only 17×17cm and is perfect for small compartments such as for car PCs, Industrial PCs, POS, DIY or for small inconspicuous living room HTPCs (Home Theater PCs), says Albatron.

The KI690-AM2 employs the AMD 690 and SB600 chipsets, boasting a powerful integrated graphics engine which means that you can get great small-board gaming performance. The graphics engine is also perfect for Windows Vista, the first operating system to take advantage of graphics subsystems, says Albatron.

The KI690-AM2 is stocked with four SATA II connectors with RAID 0, 1 & 0+1 and 3Gb/s disk performance for downloading, uploading and gaming, says Albatron. It also has one IDE connector supporting ATA hard disks and CD drives.

The KI690-AM2 is built around AM2 performance and is a perfect fit for HTPC and Windows Vista, featuring full featured audio and graphics facilities, adds Albatron. 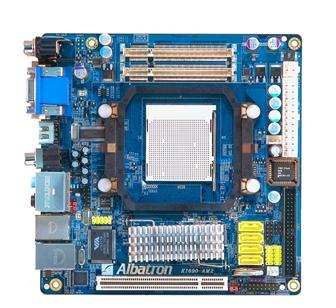