By plugging a compatible 3G notebook adapter into the D-Link 3G Mobile Router's built-in card bus slot, users can get immediate access to EV-DO, UMTS or HSDPA networks, according to D-Link, adding that the router can then share this signal via 802.11g/b Wi-Fi technology to notebooks, PCs or other Wi-Fi-enabled devices. The D-Link routers are available in two versions: the DIR-450 (EV-DO) and DIR-451 (UMTS/HSDPA).

For security, both versions of the 3G mobile router support wireless security features to prevent unauthorized access, including WEP, WPA and WPA2 that ensure a secure Wi-Fi network regardless of the connected devices, claims D-Link. They also employ dual active firewalls (SPI and NAT) to prevent potential Internet attacks.

The D-Link Mobile Wireless Routers can be installed as a wireless network in minutes, and it can easily configure the user's Internet Service Provider (ISP) settings to quickly establish high-speed Internet connectivity, according to D-Link. The built-in 4-port full-duplex 10/100 switch allows seamless connection of Ethernet-based devices.

Without a mobile broadband connection data card, the DIR-450 and DIR-451 work as standard 802.11g wireless routers, such as the D-Link RangeBooster G models, said D-Link.

The DIR-450 model of the D-Link Mobile Wireless Routers is available now at a suggested retail price of US$299.99. The DIR-451 is targeted to begin shipping later in the first quarter 2007 with pricing to be announced at that time, according to D-Link. 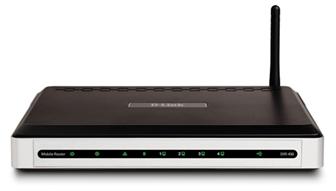