Eric Chen, DIGITIMES Research, Taipei Friday 13 August 2021 0
The DIGITIMES Research special report you are trying to open is sold a-la-carte and is also available with Semiconductor Special Report Database services. Please sign in if you wish to continue.
TSMC is currently in the lead in terms of process technology but Samsung Electronics has been gearing up on its related R&D, eyeing to catch up.
Abstract 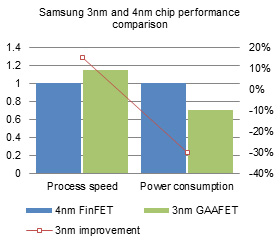 Samsung is set to launch its 4nm process in second-half 2021 and plans to use gate-all-around field effect transistors (GAAFET) at the 3nm node as part of its efforts to overtake TSMC. However, Samsung has deferred its 3nm volume production to 2023, which could create some difficulties for it to narrow the gap with TSMC in the short term.

According to data released by Samsung, its 5nm process is only an optimized version of its 7nm process and lags behind TSMC in terms of chip performance boost and power consumption reduction at the same process node. Furthermore, although Samsung's 4nm node will enter volume production in 2021, its 4nm chips are estimated to be equivalent to TSMC's 5nm chips in performance.

Samsung will lead the industry in mass producing GAAFET at the 3nm node but its 3nm chips are expected to be comparable to TSMC's 3nm chips in terms of performance and power consumption improvement.