OpenStack Day Taiwan 2018 - a major annual event for the Taiwan open source community - took on a whole new look with OpenStack renamed OpenInfra. Carrying on with the same OpenStack spirit and architecture, OpenInfra will engage more partners specializing in open source technologies and continue to flourish in the world of cloud computing.

Delivering an opening speech at the event, OpenInfra Day Taiwan 2018 organizing committee chairman Brian Chen remarked that this year's event gathered influential leaders to share their views on the latest OpenInfra trends. The change in the organization's name allowed it to expand the discussion topics and engage more industry ecosystem partners. Providers of private, public and hybrid cloud IT infrastructure and services were invited for discussions on multicloud architecture and its deployment. For Infra, 5G and IoT, the participants looked into use case examples of edge computing, combination of 5G and IoT, as well as developments of IoT devices and application services. The discussions related to software-defined everything focused on the trends of software-defined storage, network and infrastructure. Popular AI topics including deep learning and machine learning were also highlighted at the event this year. In closing, Chen hoped the event would load participants full of inspirations and help advance Taiwan's IT and open source developments.

A close look at current developments of OpenStack with a market value of US$6.1 billion

Bryce continued to present some important data. According to the results of the foundation's user survey, OpenStack is supporting infrastructure running across more than 10 million CPU cores around the world. Among OpenStack users worldwide, 71% are corporate users deploying OpenStack in production environments or are preparing to do so within the next 12 months. Lastly but most importantly, the OpenStack market size is estimated to top US$6.1 billion in 2018.

Applications today have different requirements for OpenStack, cloud and infrastructure than before. They need AI machine learning, container, ML and serverless technologies more than ever before, which drives rising demand for open source software for use outside of datacenters by edge computing, added Bryce.

The foundation is transcending the open source spirit to a higher level with the transition from OpenStack to OpenInfra. Open source software will become not only omnipresent but also part of people's daily life in the future, summarized Bryce.

Current development of Kata container and comparison to gVisor

According to Wang, Kata container was developed with the goal to make it independent of hardware architectures, so it not only is compatible with the OCI runtime specification but also supports the Kubernetes Container Runtime Interface (CRI).

Wang also shared his observation on a special development – information security concern about Kata container becoming the focus of attention. Then, he gave a comparison between Kata container and gVisor. gVisor is a new sandboxed container runtime authored by Google, which provides secure isolation for containers while being less resource intensive than a full virtual machine. In comparison to Kata container, gVisor supports most Linux system calls and is designed with different trade-offs than existing container technology. Wang wrapped up his talk with a few key characteristics about Kata container. Like runC containers, Kata containers deliver the security of virtual machines while supporting other VM accelerating technologies. Despite using virtualization, Kata containers are light, fast and easy to integrate into many different application workflows. It supports multiple architectures including x86_64, arm64 and ppc64le.

In summary, Chao shed light on NCHC's role at the international level. Focusing on AI-HPC cloud services, the goal is to provide a selection of flexible service models where CPU, GPU and other public-cloud-based computing services are consolidated through cloud resource management software. It not only effectively increases the usage rate of domestic AI computing platforms but also combines public and private clouds to carry out computation for researchers on cloud platforms worldwide through a single management interface with uniform features in one implementation.

As the Taiwan government is devoting tremendous resources to fostering AI developments, spurring burgeoning innovations, now is a good time for AI undertakings. Keeping a clear vision of the goal and the strategy to find partners, build teams and make alliances, NCHC endeavors to build hardware and software platforms for use by the industry, government, research institutions and academia.

For its low data latency and high transmission frequency, edge computing will enjoy rapidly rising demand particularly from IoV, AR and VR applications. It is estimated 75% of data will be processed and even stored at the edge by 2022.

According to ISTI, solutions targeting vertical applications will present better opportunities for vendors to penetrate into the edge computing market. As to the business models, B2B IoT applications are generating rapidly growing values while the B2C segment will focus on smart home applications with service providers like Apple, Amazon and Xiaomi dominating the market. The competitiveness of edge computing will hinge on whether it can achieve economies of scale. Cloud service providers are betting on increasing their volume of connected platforms. IT hardware suppliers are looking to expand the deployment of their products through vertical applications and cross-sector collaborations.

To Taiwan-based vendors expanding into edge computing, Wei suggested two development strategies. First, they should form strategic alliances with international platform operators to jointly develop solutions integrating software and hardware or make their way into the supply chain. Second, they can focus efforts on applications with tremendous potential. 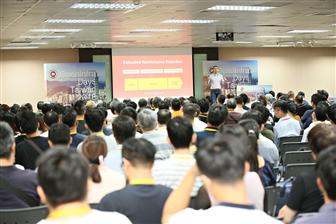