The role of China in car industry

China accounts for a third of the global car market. And of the 2.2 million electric vehicles (EV) sold worldwide in 2019, 48.2% were sold in the China market. No wonder China carries so much importance in the car industry.

Around 2000, car vendors from around the world flocked to China. There were so many foreign cars running in China that the country was described as a "colony" of foreign carmakers.

But 20 years on, the car industry has seen drastic changes. European, US and Japanese car vendors may still be leaders in the market, but they rely heavily on production in China.

And for EV production, six of the global top-6 EV battery makers are Chinese firms. The importance of batteries in EV production must not be underestimated: Batteries account for over 40% of the cost of an EV. And of course, the production of EV batteries involves the supply of rare earths, a sector which China dominates. What will the future be like for Western carmakers and Taiwanese suppliers when the age of EV arrives?

Foreign carmakers flocked to China after it entered WTO. The world's top three automakers, General Motors (GM), Volkswagen and Honda, all have more than 30% of their vehicles manufactured in China. In particular, GM's factories in China account for 45% of its production, and VW's 38%. That is, the world's largest automaker VW produces slightly over 10 million vehicles a year and four million of those are made in China. GM makes three million cars in China.

Foreign automakers rely heavily on China, which at the same time has developed a strong car industry of its own. But China is not eyeing the traditional fossil fuel cars or doing manufacturing for foreign car vendors. Rather it is keen on developing EVs, car components integrating software and hardware, and creating services.

The future of car industry

At CES 2020, at least 30 vendors showcased their concept cars, including Mercedes and BMW. Mercedes' Vision AVTR, inspired by the movie Avatar, boasts use of clean energy and harmony between humans and nature. The fish scale-like exterior looks like breathable skin, which allows the vehicles to communicate easily with the outside world. Sony's Vision-S concept car, with 33 cameras replacing the rear-view mirrors, demonstrates the Japanese vendor's attempt to tap the car market by leveraging its strength in electronics.

Traditional automakers may partner with leading electronics manufacturers, with an aim to replace global tier-1 automotive component suppliers including Japan-based Denso, Germany-based Bosch and Continental, and Canada-based Magna International. Bosch CEO Volkmar Denner does not expect an increase in global automotive production in the next five years. He also foresees that the current business model in the car industry will come to an end by 2030.

Does the joint venture between Foxconn and Fiat Chrysler (FCA) mean that when EVs become more popular in the car market, the production process will be similar to that of electronics? Compal, Wistron, Inventec and Delta Electronics are all eyeing the car market in their "post-PC" deployments. 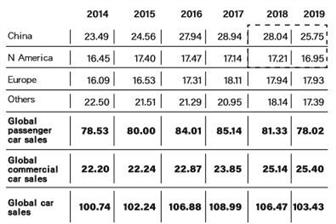