China's coronavirus outbreak is set to have far-reaching impacts on the global IT industry and could undermine global demand to a great extent if related supply chains are cut off, according to Colley Hwang, president of Digitimes.

As health authorities battle the epidemic, the severity of the impacts on the global IT industry still needs to be fully understood, Hwang said in live broadcast TV program aired in Taiwan recently.

The program where Hwang presented his insights into the IT supply chain in the wake of the outbreak has been viewed more than 100,000 times after it was uploaded to YouTube, which underlines the growing concerns about the damage that the epidemic has done to IT ecosystem and market.

This is because Taiwan-based companies play a key role in the formation of the highly-connected global IT industry where all parts are tightly interwined.

A large number of Taiwanese businessmen who have returned home for the Lunar New Year holiday have now been unable to return to work in China, and their counterparts in Europe and the US as well as their clients are unlikely to travel to and from China at the moment. This means, Taiwanese businessmen are in a better position to monitor the ongoing industrial changes from the perpsective of the supply chain, with their insights and observations likely to serve as barometers of future industry trends.

Hwang's initial observation is based on an assumption that the epidemic will come to an end at the end of June, coupled with dynamic market situations and analysis of three major aspects of the IT industry: the industry fundamentals, supply side and demand side.

The fundamentals include the US-China trade relationships, the ongoing developments of 5G/AIoT applications and the coronavirus outbreak itself, while the supply side information focuses on the handset, computer and components sectors in addition to the emerging businesses.

Hwang urges businesses to pay attention to the fluctuations in the demand of some key industries such as PCs, mobile phones, and TVs. He also believes that the emerging business opportunities related to IoV, autonomous driving and electric vehicles (EV) coupled with their supporting mechanisms will form a stream of information that will provide meaningful read on related supply chains.

With regard to the demand side, the degree of shrinkage of the China market, as well as the impacts on its industries in the wake of the outbreak have to be monitored closely, as China's GDP currently accounts for 17% the global GDP, and a dwindling Chinese economy will have a far-reaching impact on the advanced economies in the US, Europe and Japan, as well as other emerging economies, Hwang asserts.

Digitimes Research forecast at the end of 2019 that global smartphone shipments are likely to grow 4.5% on year to 1.42 billion units in 2020. The forecast was based on the prospects of the release of 5G phones.

However, these optimistic estimates may have to be downward adjusted by the black swan - the coronavirus.

Based on the experience from the SARS outbreak in 2003, and an assumption that the epidemic may be contained at the end of June, Digitimes Research expects the present outbreak to cut smartphone sales in China by 30% to 280 million units in 2020 compared to 400 million units it forecast earlier.

Meanwhile, the outbreak will cut smartphones shipped to elsewhere around the globe outside China in the year to 800 million units, down 20% from one billion units as projected.

Together, total global smartphone shipments will reach only 1.08 billion units in 2020, a contraction of 22.9% from Digitimes Reseach's forecast of 1.4 billion units.

If the outbreak prolongs to year-end 2020, then the global economy should be ready to face a steep fall in demand as smartphone sales in China are likely to shrink to 160 million units or 40% of projected volume for the year. And consequently, global smartphone shipments could fall to as low as 600 million units in the year.

However, this worst-case scenario is subject to correction by actual shipments alongside with the gradual resumption of work in China. 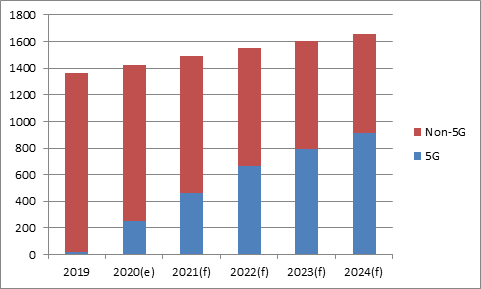