At Computex 2019, Intel showcased how it is working with the ecosystem to bring the latest Wi-Fi 6 technology to new PCs and home routers and gateways. Wi-Fi 6 delivers ultra-fast, reliable and responsive connections, even in environments with many devices connected simultaneously, which is important since it is estimated that each person in North America will have 13 or more connected devices by 2022.

Not all Wi-Fi 6 is created equal. Intel Wi-Fi 6 (Gig+) solutions for PCs and home routers and gateways are Gig+ capable, meaning they use 160 MHz channel bandwidth to get true gigabit speeds. This enables best-in-class performance for browsing, working, gaming and streaming, with gigabit speeds that are two times faster than mainstream Wi-Fi 6 solutions and nearly three times faster versus standard 802.11 AC solutions. Intel's Wi-Fi 6 solutions for PCs and home infrastructure are also performance optimized with the user experience in mind.

Intel Home Wi-Fi Chipset WAV600 Series is Gig+ capable and was the industry's first Wi-Fi 6 solution for dual-band 4-stream (2+2) routers and gateways, making it possible to start experiencing the benefits of Wi-Fi 6 in an affordable way. Wi-Fi 6 (Gig+) routers and gateways powered by Intel's Wi-Fi 6 technology are designed to use 160MHz channel bandwidth to deliver true gigabit speeds on capable PCs, including today's PCs with integrated 802.11ac Gigabit Wi-Fi and new PCs with Intel Wi-Fi 6 (Gig+). 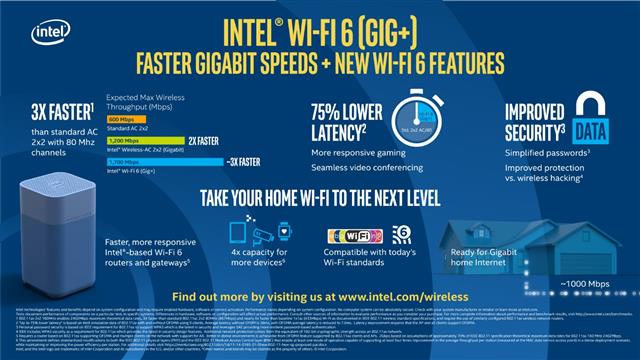