Sony has announced the upcoming release of the ECX339A OLED microdisplay featuring UXGA (1600 x 1200 resolution), the highest in class for a 0.5-type. This product achieves the world's smallest pixel pitch of 6.3-micron by leveraging Sony's OLED display technology and miniaturization technology, enabling a resolution 1.6x higher than the previous model.

By employing a new drive circuit design that operates on half the voltage of the previous model, the new product achieves the same level of low-power operation as its predecessor but with much higher resolution. When paired with Sony's original driving system, a frame rate up to 240fps is supported - double that of previous product, the vendor said.

Enhancing the resolution on microdisplays has traditionally presented problems such as deteriorating image quality due to decreased pixel pitch and inferior viewing angle properties. The new product features optimized transistors layout and process to address uneven characteristics and loss of withstand voltage, the issues associated with transistor miniaturization. The Sony original variation compensation circuit also enhances picture quality. Additionally, the color filter is deposited directly on the silicon substrate, reducing its distance from the light emitting layer, and the filter's color array has been modified. This helps to secure the viewing angle properties while achieving high resolution.

Going forward, Sony expects this high-definition OLED microdisplay to be employed in a diverse range of fields and applications such as AR (augmented reality) and VR (virtual reality) head-mounted displays. 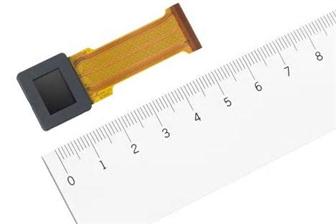