While UFS has held much hype as being the successor to eMMC providing greater performance, it has yet to be seen if the mobile market as a collective whole has embraced this technology, according to Robert Bielby, senior director of Automotive at Micron Technology.

A quick poll of the leading smartphone manufacturers yields an inconsistent story in regards to their propensity to move away from the existing, proven, eMMC technologies in favor of adopting UFS, Bielby wrote in an email response to a recent Digitimes Research article about the prospect of the UFS market.

In practice most of the potential performance that is offered by UFS at the physical layer is obfuscated due to the immature, bloated software interfaces that ultimately affect overall system throughput, Bielby said.

For the automotive market, the immaturity of the UFS will present unique challenges in embracing a technology that was targeted for a consumer application, missing the robustness and safety required for next generation automotive applications where safety, end to end data path protection is increasingly a non-negotiable capability, asserted the Micron executive.

According to Bielby, with 35 years of industry adoption, the PCI standard is well proven across a broad spectrum of applications with well refined software stacks and system level integrity that is aligned to the needs of the most demanding markets.

For lower density solutions, eMMC is still proving to have long-legs as extensions to the existing spec such as 5.2 continue to extend the longevity of this solution which has already proven to be the industry's workhorse.

In short, while the UFS spec has seen a lot of hype in the past year, what is not clear is the ability for UFS to deliver to the promise of higher performance, Bielby continued. The broader mobile market is on the fence in adopting this technology, and is showing a trend to remaining with eMMC at lower densities, and embracing (PCIe based) NVME in applications that demand higher performance, higher density, or reliability that extends beyond and early generation consumer specification.

At best, UFS will prove to be a distraction to the broader storage customer base for those who consider the technology, and most likely prove to be a dead-end strategy as OEMs will have to re-think their storage strategy in light of the existence of more robust, proven technologies, he added. 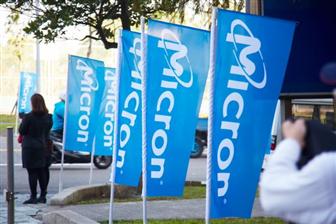 Micron believes UFS will prove to be a distraction to the broader storage customer base for those who consider the technology.
Photo: Digitimes file photo