OLED, one of the most important displays technologies, is drawing attention with a rising number of applications available on the market. OLED and flexible displays technologies have both matured, enabling commercialization of products with slimness, flexibility, high contrast and sunlight readability that attract consumers. According to iHS DisplaySearch, the worldwide market of small- to medium-size OLED panels will show an at least 15% annual growth for three consecutive years beginning from 2015. Shipments for wearable devices and smart home applications will exhibit the highest growths.

WiseChip Semiconductor Inc. (5245) - a Taiwan-based panel maker who has shipped the second largest volume of PMOLED panels worldwide for two years in a row - has been focusing on wearable devices for three years and has delivered impressive results in its expansion in the smart wristband and smart watch sectors. DIGITIMES Research expects panel shipments for smart watches by makers in the Greater China region to grow at a CAGR of 73.2% in 2014-2017. Particularly in terms of PMOLED and e-paper displays, Taiwan- and China-based panel makers have absolute advantages over competitors from Japan and Korea, and their combined share of the smart wristband panel market is likely to stay above 70% in 2014-2017.

WiseChip, who has always been closely watching market trends and demand, got a head start, developing a complete lineup of standardized small- to medium-size products, such as round, curved and character displays. These products have been keenly promoted worldwide. WiseChip also offers customized PMOLED products to meet end-device makers' specific needs for modules of various sizes. WiseChip will showcase a series of wearable display modules and applications at its K1025 booth at Touch Taiwan 2015, held at Taipei World Trade Center Nangang Exhibition Hall on August 26-28. 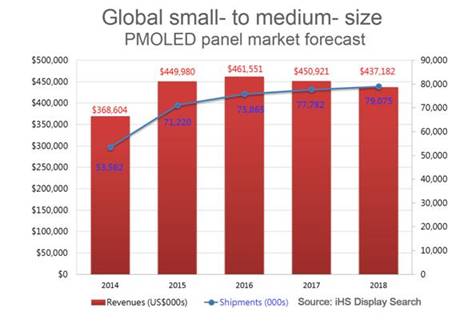