Microsoft's Windows 8 platform has launched a new computer era of touch screen control. However, the cost of touch-control notebooks remains high and can only provide a 2D control experience - equivalent to that of a tablet - and cannot provide more intuitive somatosensory control. Microchip Technology, a leading provider of microcontroller, mixed-signal, analog and Flash-IP solutions launched its newly patented GestIC technology in November of 2012, which provides a wide range of new motion control technologies for an assortment of current computer terminal applications. Using the non-contact gesture control user interface, the 3D computer control experience is realized.

The Apple iOS and Google Android platforms have introduced touch screen control technology in handsets, tablets, and other consumer products to successfully replace push-button designs. The Nintendo Wii, Microsoft Kinect technology, and Sony PS3 Move have also introduced somatosensory control into gaming consoles to create new video gaming methods where the human body becomes the controller. As for the computer market that primarily uses the keyboard and mouse (or trackpad), the introduction of Microsoft's Windows 8 has enabled a new touch screen control interface that accelerated the computer "tabletization" era.

However, Windows 8 touch screen notebooks are expensive and only provide 2D control. It is tiring to use long-term and users end up with a screen full of fingerprints, while the practicality of the whole process is still under review. These conditions have prompted other control-technology vendors to target the computer market to provide new somatosensory control technologies. Andreas Guete, marketing manager of the Asia-Pacific Human Interface Division (HMID) and Advanced Input Devices of Microchip Technology, provided a further explanation and demonstration for next-generation 3D gesture computer control technology.

The technical principle of GestIC is to generate an electric near-field wave approximately 15cm that surrounds the IC and transmits a 100kHz carrier frequency at a corresponding wavelength of 3km. Because it is a radio wave, distances between electrodes are extremely small, and the magnetic field, as well as the amount of radiation, are actually zero. A quasi-static electric field – unaffected by mobile radio inferences such as Wi-Fi, Bluetooth, and CDMA – can be created, and is also unaffected by surrounding environmental factors such as light, sound, skin tone, temperature, or humidity. The wave can accurately and rapidly detect and track hand positions to provide non-contact 3D gesture recognition.

GestIC uses printed circuit board (PCB) traces or various conductive materials on the indium tin oxide (ITO) coating of the touch sensors to produce up to five electric near-field sensing electrodes. The technology can directly and subtly be integrated within the housing of products such as traditional notebooks, tablets, keyboards, electric drawing boards, handsets, or various remote control devices, which would not affect the aesthetics of industrial design.

The GestIC technology MGC3130 single-chip solution can create a 150 DPI mouse resolution equivalent with a 200Hz sampling rate that can accurately detect rapid hand gestures and finger movements. It also has an ultra-low noise simulation front-end. The device has an ultra-low current consumption of between 150 microwatts and a maximum of 70mW when in the sensing state, which is 90% more power efficient compared with the somatosensory recognition system of a general photographic lenses (of approximately 1200mW), and has an automatic wake-up capability that ensures the gesture sensing function of mobile devices is permanently activated. It can automatically self-calibrate to maintain high-precision detection capabilities, can instantly process hand gestures and x/y/z position data and comes with a built-in Colibri Suite gesture database, as well as a 32-bit digital signal processor and integrated flash memory and an upgradeable gesture database. The chip adopts a 70-130kHz frequency-hopping electric field and can eliminate radio-frequency, ambient light, and sound interferences.

Guete indicated that for a Windows 8 notebook, desktop, and AIO PC systems, the only thing that hardware vendors have to do is to add GestIC technology into the keyboard (PCB electrode coating) in combination with the MGC3130 to enable hand gesture to control the new Windows 8 interface. For example, wave left to activate Charm Bar, wave down to close Apps and to easily control the system without touching the screen.

Mass production of the MGC3130 chip began in April 2013 and comes with a single-zone evaluation kit to allow designers to easily use the MGC3130 to develop various 3D hand gesture control for IT products. 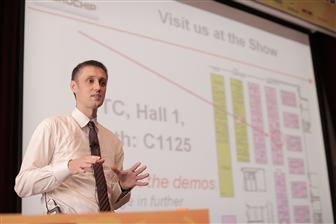