The world of applications of wireless capacitive pens: A more refined and delicate pen experience

PIXCIR Microelectronics, a company focused on capacitive and touch technologies; and Hanvon Technology, a leader in electromagnetic induction pen technology, have cooperated to promote a multi-touch capacitive pen that enables delicate pen writing applications to a variety of mobile devices.

Dr. Lionel Portmann, CTO of PIXCIR, indicated that current touch screens available in the market have a surface-coated mesh of electrodes and can only provide two-dimensional (2D) finger reaction detection. Although there are independent 3D control solutions in the market that can respond to the X/Y/Z axis movements with a control distance of up to 10cm – such as Z-axis scaling, tilt/joystick input and non-contact page flipping and proximity detection – these technologies still cannot be integrated into a touch screen.

In addition, the touch screen electrode can also be used for short-distance sensing applications such as access cards, access controls, and electronic payment sensor devices. The capacitive pen is controlled by the electrodes in the touch screen surface. It must also work in conjunction with the small pen tip, pressure sensor, and palm input functions.

The PIX C32 Tango IC touch control chip developed by PIXCIR only requires a third-party proximity sensor and capacitive pen to provide 3D (X/Y/Z axis 8cm) control applications with a capacitive pen. The entire tablet or mobile handset only requires the conductive pole of its touch screen surface and no other additional components. The operating principle is that the tablet will issue a command to locate the position of the electric pen, and then accept the pressure from the digital capacitive pen, as well as the data transmitted from the pen tip. Portmann then played a video clip that demonstrated the fairly smooth handwriting created by the capacitive pen developed by PIXCIR and Hanvon. At present, patents for PIX C32 have been approved in Europe, China, the United States, and Taiwan; and patents are still under review in Korea and Japan.

Next, PIXCIR CEO Hung Jiin-Wei and Beijing Hanvon Technology's vice president of R&D Xiang Guowei took the stage together. Hung used a 6-inch notebook that combined the technologies of PIXCIR and Hanvon for a writing demonstration, while Xiang indicated that Havon and PIXCIR have been in cooperation since December of 2012.

PIXCIR provides the touch technology and Havon provides the pen technology; and together, they have developed a new generation of capacitive pen technology. Hanvon's wireless capacitive pen features more software features than other offered by competitors, no additional radio frequency (RF) is needed, and the antenna transceiver modules and induction coil can achieve the effect of an active capacitive pen. It supports Android and Windows systems and can provide a minimum 1mm square capacitance pen tip.

Xiang also mentioned that the entire market wants to go paperless, and there is a clear trend for handwriting input devices. The pen input device is a must have for signature approval for the education, medical, industrial, and financial banking fields. The Samsung Galaxy Note pen phone that uses Hanvon's pen technology and the Microsoft Surface Pro tablet equipped with the electromagnetic induction pen (EM Pen) have also attracted quite a bit of attention. The Galaxy Note estimated that its 2014 shipments will exceed 100 million. There is also a huge market for smartphones, educational pen tablets, and POS signature devices. It is forecasted that the 2013 global pen market will reach US$1.5 billion.

Xiang indicated that the emergence of certain human-machine interfaces/input devices will lead to the rise of certain work platforms, or even drive a change in the manufacturing chain. For example, in the past, keyboards created the popularity of DOS, the keyboard + mouse combination created a Windows boom, and the multi-point touch screen had driven the iOS and Android operating systems. Hanvon believes that the next application trend is the multi-touch screen + pen. Its success is dependent on factors such as promotion by powerful giants such as Samsung to design easy to use and non-awkward products, as well as develop rich pen related software, to create comfortable pen writing applications and achieve a 100% handwriting recognition rate.

Xiang indicated that the electromagnetic induction pen developed by Hanvon is designed to emit positioning electromagnetic waves through the electromagnetic radio frequency (ERT) modules at the bottom layer of the screen panel. The pen does not need an induction coil and battery, can easily satisfy weight requirements, and can provide the subtle feeling of digital pressure as well as a fine handwriting width of 0.1mm. In addition to the chip and electromagnetic pen, panel manufacturers only require between US$3-5 in increased costs. Hanvon's EM pen can achieve a 5080 LPI resolution, a sensing height range of 0-30mm, 2048 digital pressure sensor bands, 60-degree inclination sensing, 1-4 buttons/knob simulation, 360-degree rotation sensing, and pen eraser rubbing simulation functions. 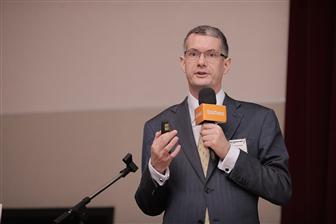 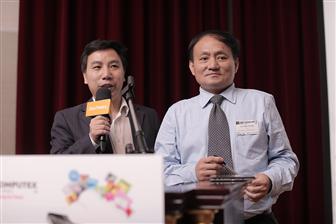